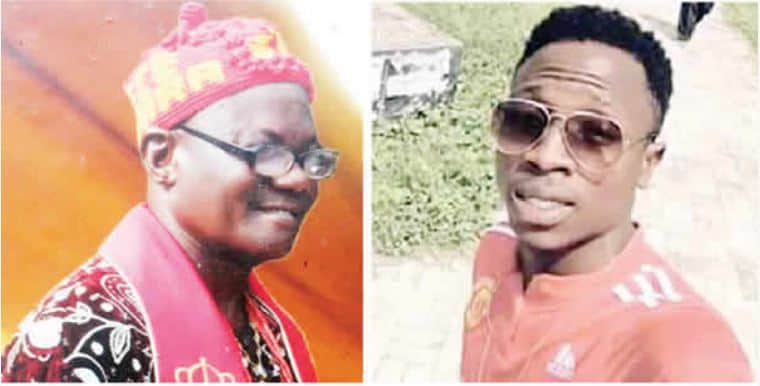 A traditional ruler in Imo State, Eze Opara, has allegedly killed a 25-year-old graduate, Uchenna Opara, aka Junior, in Umueze community, in the Mbaitoli Local government Area of the State on Wednesday.

Naija News gathered that the incident happened at the community’s primary school playground around 6:15pm.

Punch reports that irated youths gathered at the palace of the monarch and set it ablaze including the suspect’s Nissan car and his oil mill which was not far from the palace.

The youth leader of the community, Bethel Iwuoha, narrated to Punch that while one of the security guards of the monarch, Atuonye Opara, allegedly cocked the pump-action rifle, Eze allegedly pulled the trigger wherein the bullet instantly hit Junior, a 2017 graduate of Library and Information Science of the Imo State University, Owerri, on the chest.

He said the monarch and his security aide hurriedly entered into a car and fled from the scene, adding that Junior was rushed to a police clinic at Amakaohia, where he was confirmed dead.

The youth leader accused Eze of always using his security guards to intimidate indigenes of the community. He recounted that crisis ensued when the youths, who made use of the playground for their football training, protested that the son of the monarch, Temple Opara, could not take over the field with a football team he brought from Port Harcourt, Rivers State, without informing the youths who had been cleaning the pitch for a long time.

According to him, the prince then gave the youths N10,000, which annoyed the monarch who demanded that the money be given back to him (Eze).

He said, “While we were training on Wednesday evening, the traditiaonal ruler, who was returning in his car with Atuonye, reversed and headed for the pitch. They both alighted from the car and started shouting at us.

“The monarch said we were challenging his authority in the community. While he was shouting, his security guard went into the car and brought out the pump-action rifle.

“The monarch took the gun and wanted to shoot us, but his personal assistant attempted stopping him. It was in the course of struggling with his PA that a bullet went out and hit Junior on the chest. The traditional ruler, out of fear of attack from the youths, abandoned the gun and fled.”

The father of the deceased, Franklin Opara, who is a retired customs officer said the monarch killed his son, who was supposed to go for his youth corps in March 2017, and therefore, demand for justice for the death of his child.

“Junior was supposed to proceed on his National Youth Service Corps programme in March 2017, when he was killed. I was with him a few hours before he went to the field. He was not just my first son, but my first child. I call on the government to give me justice. My son cannot die in vain,” he said.

The state Commissioner of Police, Chris Ezike, when contacted said that Eze has been arrested and investigations were ongoing, adding that security operatives have been deployed to the commuinty to restore normalcy.