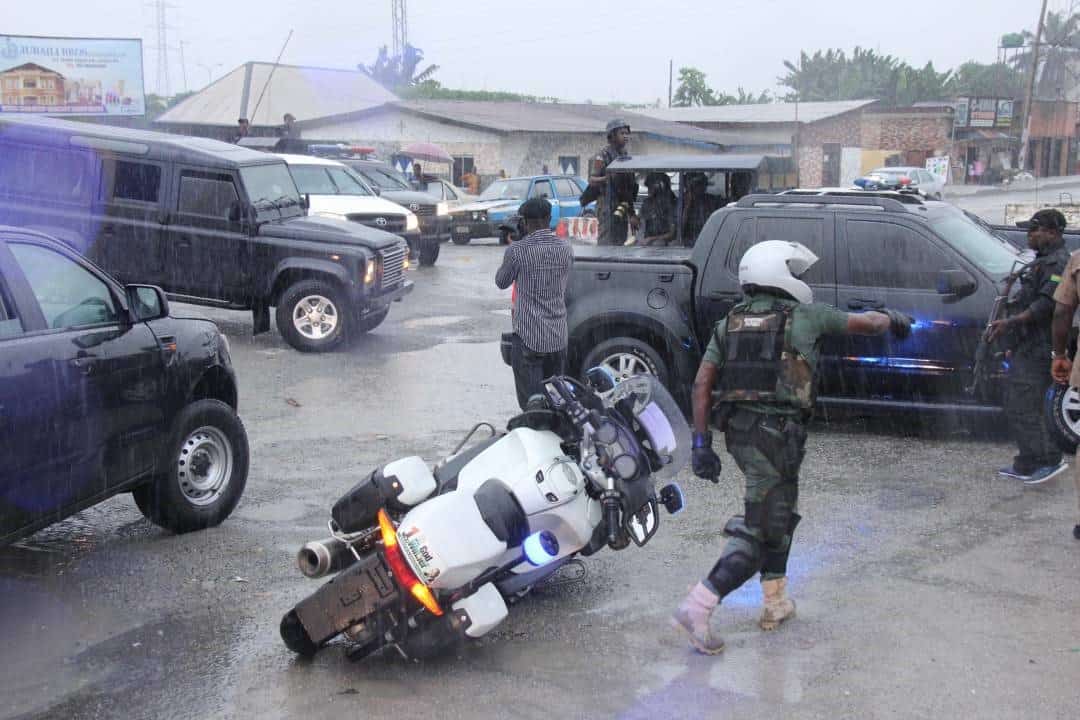 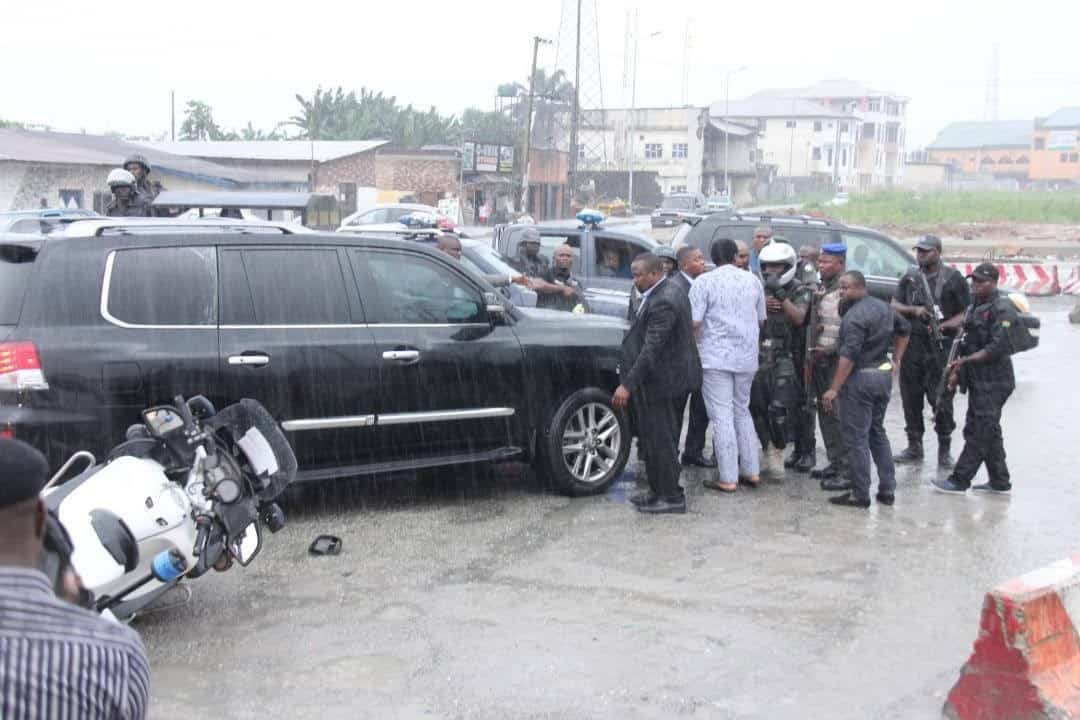 Scene of an attack on the Convoy of the Rivers State Governor, Nyesom Wike by soldiers and SARS Personnel attached to the Minister of Transportation atWanja Junction, Trans-Amadi Road in Port Harcourt Saturday (11/11/17) (Premium Times)

Governor Nyesom Wike and the Minister of Transportation, Chibuike Amaechi, are currently trading blames after security aides clashed in Port Harcourt on Saturday.

Gov. Wike claims that he was attacked by officers of the police special anti robbery squad attached to Mr. Amaechi’s convoy.
The spokesperson to the governor, Simeon Nwakaudu, in a statement said Wike was on project inspection when he was attacked at Nwanja Junction on Trans-Amadi Road, Port Harcourt.

“The SARs Personnel and Soldiers in the Minister’s convoy hit down the Governor’s Escort Rider and attacked the policemen in the pilot car,” the statement said.
“Also part of the attack, was the Commander of Rivers SARS, Mr Akin Fakorede who received the Minister of Transportation at the Port Harcourt L Airport and accompanied on his trip.”

“The Minister of Transportation had over 50 SARS Personnel, Soldiers and Mobile Policemen in his motorcade.”
Mr. Wike was unhurt, the statement said.

In a statement, the former Rivers governor said although he eventually passed through unhurt, his car was “vandalised with a broken side mirror”.

“Accompanied by cars of many of his supporters, the minister’s black jeep was intercepted and blocked at the junction by the security motorcycle outrider attached to Wike after two cars had passed through.”
“One of the two cars had security men assigned to protect the minister in Port Harcourt. Suddenly, gun-toting security men attached to Wike’s convoy, surrounded the minister’s car, threatening to shoot him.”
“They hit the car, tried to smash the windscreens, back and side windows and broke a side mirror. All through this attack, Amaechi remained calm, inside the fortified Jeep. While the attack occurred, Wike remained inside his vehicle.”

The statement said the minister eventually passed through after the intervention of the security team on ground to protect him in Port Harcourt.
“However, when governor Wike got to the point where the incident occurred after Amaechi’s vehicle had gone by, his security men blocked the road again, dragged out from a vehicle and thoroughly beat up a policeman attached to protect Amaechi in Port Harcourt. The policeman’s rifle was also taken from him,” the statement said.
Governor Wike recently accused officers of the special anti robbery squad of being behind the series of kidnappings and armed robbery incidents in the state.