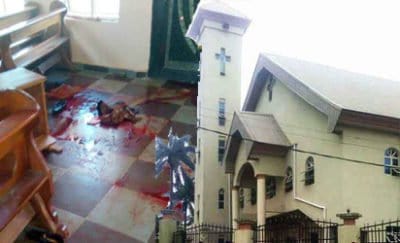 -Police have identified Prince Charles Obi (a.k.a Gozila) and Dickson Nwodi as masterminds behind the Ozubulu church attacks.

-The two suspects are currently behind bars in South Africa.

Three months after the deadly massacre of worshipers at  the St. Philip Catholic Church, Ozubulu, Anambra state, the police have identified two suspects who are currently behind bars in South Africa as been responsible for the attack.

The suspects have been identified as Prince Charles Obi (a.k.a Gozila) and Dickson Nwodi.

According to him, Obi and Nwodi, from Nnobi and Oba communities respectively, had instructed one Quintus Anayo, also based in South Africa, to inform Ozubulu elders that they were responsible for the invasion.

The commissioner said Anayo’s account corresponded with the findings of police in the matter and that the command had already established contact with INTERPOL in a bid to extradite the suspects.

Umar also stated the police were intensifying arrangements to arraign the three suspects earlier arrested in connection with the killings adding that they would be arraigned within a week.

Recall some unknown gunmen had on August 6, launched a deadly attack on a catholic church in Ozubulu, Anambra State, killing several worshipers dead and leaving many injured.

Following the attack on the church during an early morning mass, Police and the state government later blamed it on a drug war between two brothers.