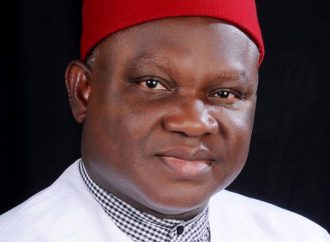 Chief Chekwas Okorie, National Chairman of the United Progressives Party (UPP), has described the agitation for ‘no election’ in Anambra and the South East as illogical and misguided.

Okorie, gave his opinion in an interview with the News Agency of Nigeria (NAN) in Awka on Wednesday.

He asserted that individuals propagating the agitation were misguided and unaware of its implications.

He said there were no stated or tenable reasons for their position and called on them to rescind their attitude and express their views through voting for the right candidate.

Okorie said Anambra should vote for the candidate of the UPP, Chief Osita Chidoka , who represents the interest of the people.

He said Chidoka would implement the manifesto of the party which guaranteed their protection.

“To think that some young people, some of them educated are campaigning against Igbo participation in an election is unfortunate.

“It is this election that will bring into office if they cooperate with UPP as expected, a governor that will reflect their aspirations and protect them as chief security officer.

“UPP is here to tell the masses that we can still have a government and leaders that care about them and mainstream them into the management of their own affairs.

“As we campaigned, I saw a people looking for true leadership, UPP is here to tell the masses that we can still have leaders that care about them and mainstream them into the management of their own affairs.

“But UPP cannot be working to have a people oriented leadership and those people we are working for are jumping in the street to shout no election, it is so very irritating.

“Moreover, the reason for non participation has not being articulated by anyone of them, there is no reason they have given that makes sense at all.

“Saying that you want referendum and that government should give you referendum is so pedestrian an argument.

“Government cannot give you referendum because it does not exist in the constitution of the Federal Republic of Nigeria where we belong.

“The only way you can go about it is to participate in democracy, elect a government that can pursue your wishes and aspirations.

“It is a stupid thing to say that there will be no election in Anambra,” he said

Okorie said the frustrations of the teeming youth is as a result of the disconnection between them and leaders in the South-East.

“There is a disconnect between the political class and elders on the one side and the masses including the youth on the other side; it is a gap that is yearning to be closed.’’