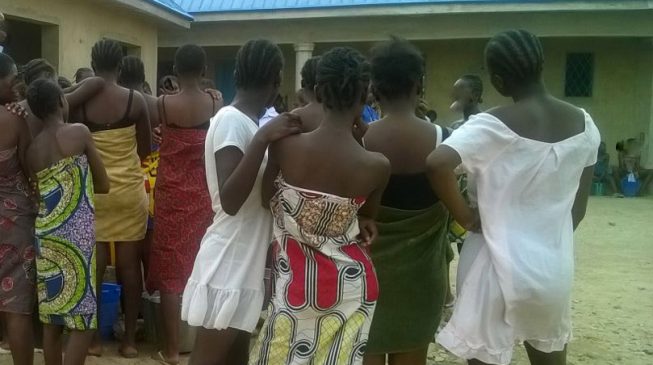 An undercover investigation has revealed how a security guard at the Federal Government Girls College (FGGC), Langtang, Plateau state, pimps school girls for men for N5,000.

The Cable reports that Bani Guest House, a popular lodge along the Langtang highway, is usually patronized by the girls where they attend Sunday evening parties and their boyfriends also come there to visit them.

Seeing the robust offer made by The Cable undercover reporters who disguised as visiting businessman in need of girls to have nice time with, the security guard was happy and talked excessively on how he pimps the girls for men.

While relishing a plate of rice ordered for him at the guest house, the guard told his would-be customer that girls in SS3 who were rounding off their final exams in July 2017 which coincided with the visit of the investigators, would make the perfect picks.

Read also: “Don’t discuss that one with me” Tinubu reacts to Buhari 2019 ambition

“I am giving you outgoing students,” he said, his face loosening into a smile. “There are some writing exams, it’s just to get a clue to know them and ask if they can do this for me. There are girls who do ‘runs’ but the issue is money.”

Naija News gathered that the guard was quick to request for money from customers so he could arrange and settle the girls’ transportation, also revealing that there are a couple of schoolgirls who are into the act of sneaking out of the school premises.

“You’ll discuss how much you’ll give them,” he said, pocketing the N5,000 the reporter had given him as upfront for the task. “All those girls are small girls and they don’t know money much. If you treat them well, they will look for you if you’re still around.”

It was gathered that the guard had left his duty post. For hours, he was moving round the school, searching for girls who could be available under the tight deadline.

He would therefore, contact the customers on phone saying, “I have arranged two girls now, and they will come to meet you when they are done with their exams today.”

However, the guard explained that the girls did not turn up as planned because they wrote their exams late and feared coming out of the school could jeopardise the other papers the following morning, assuring that they would turn up after writing the folllowing day’s papers.

One of the girls disclosed that she is not sure if girls are being pimped to strangers, but she knows some teachers whom she claimed made sexual advances to the girls, adding that some teachers touch the “girls’ breast and buttocks” and even call the them to their offices at night.

Naija News learnt that one of the newly graduated girls later spoke with TheCable, that the security guard usually pimps girls to strangers.

“He used to be a kitchen staff, he impregnated one of the girls in the hostel, you know the hostel is close to the kitchen, and I think as a punishment, he was moved from the kitchen to the gate,” she said.

Information obtained by TheCable says one of the officials of Langtang’s old girls’ association said that a year ago, they heard that girls were being pimped, but there they could not get hold of any evidence to proof the allegation.

“The pimp, we were told, wasn’t even a security guard but one of the male teachers. We have tried to investigate but we couldn’t find anything. We confronted the former principal who is now retired with this and she said there was no such thing going on. There was a specific teacher allegedly doing this with SS3 girls but no one could give his name or any useful information in getting to the root of the matter,” she said.

She added, the old girls had to disregard the allegation. We even got a girl whom we were told knew this pimp, and when we called her, she denied knowing a thing. So, we had to disregard the rumour, because if you tell us something is happening, you should be able to give us the needed information to work with. If we had a name at least, we could have done something covertly with some of the old girls who now teach at the college, and our Jos chapter could have showed up in the school unannounced.”

The ministry of education when contacted, says it is not aware of the allegations of pimping at Langtang.

Chineye Ihuoma, director of press at the Federal Ministry of Education said if there is any proof to back up the allegation, the ministry should be wriiten formally in order to coduct proper investigations.