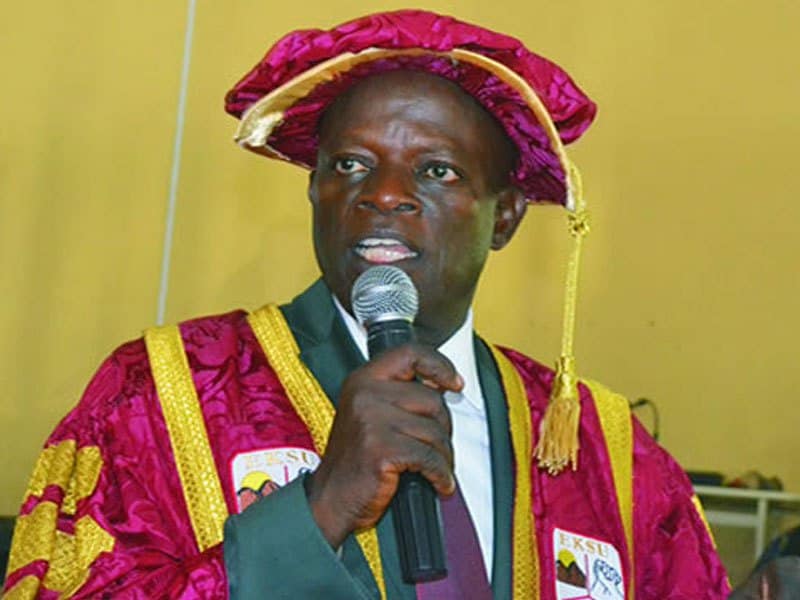 Naija News gathered that Bandele is being accused of purchasing ten new cars, awarding contracts to his wife, Mrs. Comfort Titilayo Bandele, and taking her on official foreign trips when she is not an official of the university.

The VC was also accused by his staff of renovating his residence with N20 million and appointing his wife as Director of EKSU Water, a business venture of the university.

All the allegations were contained in a leaflets distributed by the staff in the university.

Reacting to the allegations, Bandele described it as “lies from the pit of hell, accusing some former staff who were dismissed for forgery and certificate racketeering as the people behind the allegations, adding that seven of them were sacked after being indicted for the scandal.

He said: “This place was a den of corrupt people selling certificates and don’t expect that these people will be my friend.

“There are evil people here, they don’t want the university to grow; before I came to office, there was a cabal here. In fact, they forged my signature and these people have been dismissed.

He also denied the allegation that his wife was in charge of admissions, contracts and employments and her appointment as Director of EKSU Water.

However, the VC admitted going on foreign official trips with his wife which he said were based on economy class, rather than business class to which he was entitled, adding that he will always travel with his wife and not someone’s wife.

“I will continue to travel (abroad) with my wife because I will not travel with somebody else’s wife. Some women here are not happy that I did not take them along and I have no apology for travelling with my wife whether local or overseas. If I travel with my wife, why are they angry?

“We travel by economy class even when I am entitled to business class but I write for a waiver because I don’t want to defraud the university.

“When I came on board, I told the Procurement Officer not to give any contract to my wife. She has not taken a kobo contract,” he said.