-DSS ordered to restrict the press from reporting Kanu’s trial 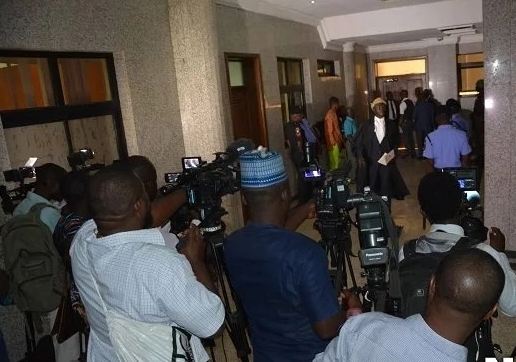 Department of State Services (DSS) have restricted newsmen from gaining access to the trial of the leader of the Indigenous People of Biafra (IPOB), Nnamdi Kanu.

Officials of the DSS stationed at the doorway of the courtroom stated that the barring of journalists is as a result of the order from their superiors.

Dressed in regular clothes, the DSS officials said: “We are working under directives.”

Another operative at about: 8.57am said: “We will allow you people when in at the appropriate time, when we get the directive to do so.”

Kanu’s trial was scheduled  to begin at 9am, as presided over by Justice Binta Nyako of the Federal High Court in Abuja.

However, the trial has taken a new turn following Nigerian soldiers’ raid on his home in Afara Ukwu, Umuahia. Since the invasion, Kanu has not been in public.

Consequently, Kanu’s lawyer, Ifeanyi Ejiofor has filed a suit against the chief of army staff, Tukur Buratai, requesting the court to order the Army boss produce Kanu for his trial.

READ ALSO  I Have Learnt My Lessons, I Am Sorry… Vanguard Newspaper Editor Apologises For Saying Yorubas Are Morons

Speculation have been ongoing that the IPOB leader has fled the country.

Meanwhile Senator Abaribe has appealed that he be discharged as Kanu’s surety, stating that since the Army’s invasion of the IPOB leader’s home Kanu has been unreachable.