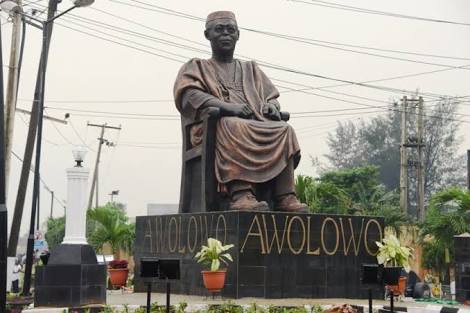 Lagos State Governor, Akinwumi Ambode has been tongue lashed by Odia Ofeimum, Personal Secretary to Obafemi Awolowo, the late Premier of the Western Region of Nigeria, over the Awolowo Statue which was unveiled recently in Lagos.

Ofeimum state that the the 20-feet statue was not a representation of the Awolowo that he knew and worked with closely for many years.

According to Ofeimum, everything about the statue was wrong, from the fact that Awo was taller than the one depicted in the sculptor, to the fact that he wore more of buba than agbada and never wore laced shoes.

“Somebody else would have to do another (Awo statue) one day and I don’t think it is fair to Ambode to be remembered as the man who did a bad Awo statue,” Ofeimum said during an interview with the Punch.

“Awolowo is taller than the person sitting down there, and you can feel it very quickly when you see the fellow.
“That was the first thing that hit me when I saw it and I thought if this man was standing, what would he look like?

“Even if the artist did not know Awolowo at all, he could still present a perfect picture.I don’t think it is good the way it is, and it is too bold an effort not to be done well.

“If they don’t do that, it’s like teaching students wrong history because when you look at it, what you see is not the history.”

Hamza Ata, the sculptor who created the statue had explained that the sitting position in which Awo was depicted was to create an impression of someone who was thinking, but Ofeimum disagrees.

“A man who is doing serious thinking won’t appear like that,” he said.

“No. Your limbs would be free, not folded or crossed; he wouldn’t wear a cap while thinking and he would have looked relaxed.
“That is not a thinking posture. He’s like a man asked to say ‘cheese’ (laughs).

“In any case, you don’t present a public figure in that manner; you present him as a public figure that he was. A true Awo statue must be a standing one , and with the V-sign.”

Ofeimum noted that the statue, if not corrected, will become a thing of mockery rather than honour for the great Awolowo.

“I mean, it is not nice. Very many school children would go to that statue and say, ‘they say the shoe is too big, let us go and look at it’, as a joke,” he said.

“I cannot remember ever seeing Awolowo with a laced shoe. I can’t remember, ever. No.

“I look back and I try to figure it out, but no, I couldn’t remember any such moment.

“And it’s not just about the kind of shoes, it’s also in relation to the rest of the body. That shoe is a bit overdone; too big.

“When Awolowo was campaigning, he hardly wore Agbada. He wore a Buba and Soro and a very simple pair of shoes, usually shoes that matched the dress.

“But, there was a way Awolowo looked when he wore Agbada this one didn’t quite look like that.”

Ofeimum said that such a project ought to have been contracted to an artist that knows his onions and not merely to patronise some acquaintance.

“I think by now, Lagos State should have a proper public art policy, which requires more than just the award of a contract, it should also involve a process of crosschecking and ensuring that what is provided is good enough for public consumption.

“I’ve seen many public artworks and it would seem some people just think if you have a friend and you want to help him to make money, you give him a job, but you create eyesores all over the place and it is not fair.

“I heard somebody bragging that nothing would be done about it. Fine. Another person would still do a proper sculpture that would make the other one look like something for the garbage.”