The Minister of Health, Isaac Adewole has prolonged indefinitely,  the suspension of Usman Yusuf, the executive secretary of the National Health Insurance Scheme (NHIS).

The indefinite suspension of Yusuf by the minister, is against the resolution by the House of Representatives in July, which directed Adewole to reinstate the NHIS secreatry.

Adewole had suspended Yusuf for three months for allegedly engaging in fraudulent activities.

The health minister had instituted a probe committee to investigate the Yusuf, on the grounds that the NHIS secretary’s response to the allegations levelled against him were “considered unsatisfactory”.

The panel’s report stated that N919m was illicitly given as payment to consultants for staff training under the suspended NHIS boss.

Adewole, in a recent correspondence said the probe committee found Yusuf guilty in the discharge of his duties. 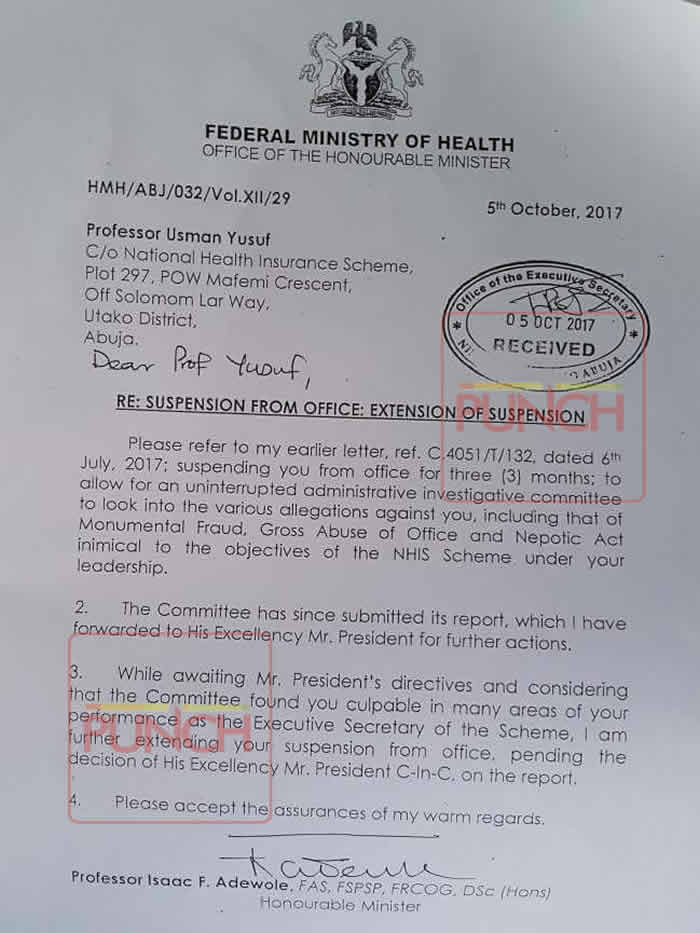 The letter reads in part, “Please refer to my earlier letter ref C.405/1/132, dated 6th July 2017, suspending you from office for three months to allow for an interrupted administrative, investigative committee to look into the various allegations against you including that of monumental fraud, gross abuse of office and nepotism inimical to the NHIS scheme under your leadership.”

“While awaiting Mr President’s directive and considering that the committee found you culpable in many areas of your performance as the executive secretary of the NHIS, I am further extending your suspension from office pending the decision of his Excellency Mr President C-in-C on the report,”‎ he added.