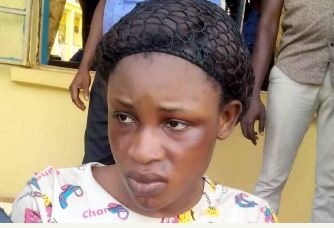 -A bride, Bose Christopher was arrested with another boyfriend and other cult members for involving in cult activities.

The Federal Special Anti-Robbery Squad, FSARS, has arrested a bride, identified as Bose Christopher alongside her side boyfriend for allegedly involving in cult activities few hours to her wedding in Abeokuta.

Naija News gathered that they were arrested during the initiation of cult members in a hotel.

The bride, according to Premium Times, who revealed that she went to the party where they were arrested with her boyfriend, said she was supposed to have her wedding introduction the next day.

She said, “It is true, I went with my boyfriend to the party and it is also true that my wedding introduction was scheduled to hold the following day I went to the ceremony with my boyfriend.”

She however, denied being a member of the cult group or having the knowledge that her boyfriend, who she claimed she started a relationship with two weeks earlier, was a cultist.

“I met my boyfriend about two weeks ago and I never knew he is a cult member. He just called me after I closed my shop to join him at the party,” she said.

Miss Bose who claimed to be a fashion designer, revealed that her husband-to-be had since stopped communicating with her since her arrest by the police.