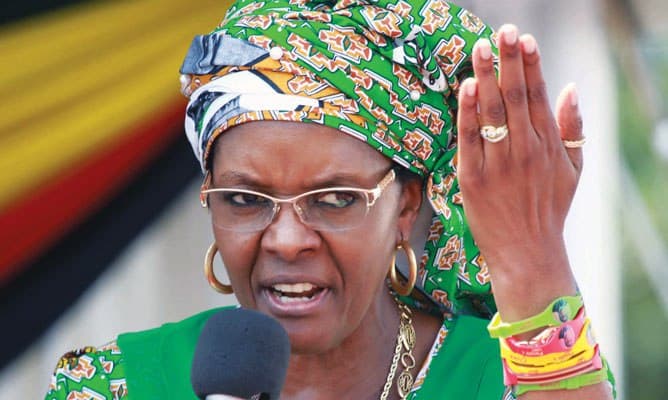 -A Zimbabwean journalist has been detained for maligning the country’s first lady, Grace Mugabe in his news story.

A legal aid group on Tuesday disclosed that a Zimbabwean journalist, Kenneth Nyangani was detained on Monday for writing a news story defaming the character of the country’s first lady, Grace Mugabe.

Police spokeswoman, Charity Charamba according to NAN reports, confirmed the journalist’s detention, saying a full statement would later be issued on the case.

Naija News gathered that Nyangani, who works with a privately-owned Newsday newspaper had written an article alleging that the first lady — a notorious shopper with a penchant for designer goods — had made a charitable donation of clothes, including used undergarments, to supporters of her husband’s Zanu-PF party.

“We understand police officers are planning on charging him with criminal defamation,” said Kumbirai Mafunda, spokesman for Zimbabwe Lawyers for Human Rights, the group representing the journalist.

Read also: Just In: Minister of State for Education, Anthony Anwukah hospitalized in the US

The group described the media situation in the country as “oppressive” noting that both local and foreign journalists regularly face arrest.

The 93-year-old President Robert Mugabe has ruled Zimbabwe for 30 years and intends to seek reelection next year. His wife, Grace has been speculated to be his successor.

President Mugabe has been accused of vote rigging, human rights violations, and self-enrichment in a country where 63 per cent of the population lives below the poverty line, according to the UN’s World Food Programme.

Zimbabwe is ranked 128 out of 180 countries in Reporters Without Borders 2017 World Press Freedom Index.