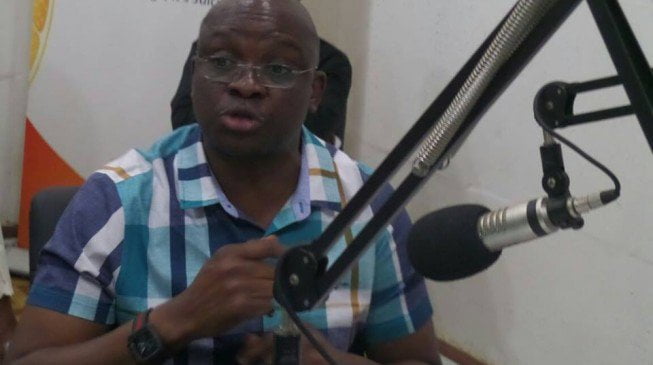 Governor Ayodele Fayose of Ekiti State, has described the arrest of two of his top officials by operatives of the  EFCC as a political vendetta arising from his declaration to contest the 2019 presidential elections in the country.

Naija News gathered the arrest of the Ekiti commissioner of finance, Toyin Ojo, and the state’s accountant general, Yemisi Owolabi, was carried out by the EFCC on Thursday following their refusal to honour earlier invitations by the anti graft agency.

Their arrest bordered on the alleged mismanagement of bail out funds by the Ekiti state government.

“It is obvious that the hawks around President Muhammadu Buhari are afraid of Governor Ayodele Fayose’s declaration to contest the presidential election in 2019,” Mr. Olayinka said.

“The EFCC is obviously living up to its status as the attack-dog of the All Progressives Congress (APC) government, but Ekiti State government under Governor Ayodele Fayose cannot be intimidated.”

READ ALSO: See those Fayose wants to arrest when he becomes President

“it is obvious that the hawks around President Muhammadu Buhari are afraid of Governor Ayodele Fayose’s declaration to contest the presidential election in 2019, hence the usual panicky measure of arresting government officials in Ekiti on the day of his declaration, with the view to embark on another round of media trial against the governor and his government.”

“It is funny that the EFCC, in the bid to carry out its usual hatchet job against Governor Fayose, failed to take into cognisance the subsisting court order, which forbids any official of the Ekiti State government from being arrested by the EFCC. Up till today, the court order has not been appealed and it subsists.”

“What has the EFCC done to those involved in the grass-cutting scam and the $43 million Ikoyi scam?”

“It is so funny and laughable that these characters in the APC government can’t even disappoint for once by being unpredictable.

“Like we have said before, the game plan of those who want power in Ekiti State by force as well as those who do not want anyone to speak against President Buhari, that they see as a god, is to stifle Ekiti State government and make it impossible for the government to carry out its responsibilities.

READ ALSO: I am destined to become Nigerian President – Fayose

“However, the EFCC and its collaborators should know that we have threaded this path before and we, in the government of Ekiti State won’t be intimidated by the irresponsibility of a federal government anti-corruption agency that has come to see itself as instrument of harassing, oppressing, intimidating and coercing perceived opposition figures.

“On this one, let us tell these agents of the devil in the EFCC and those they are working for that as usual, they have taken on a wrong customer. This is because the more they run after Governor Fayose, the more they hit their heads on the Rock of Ages and get themselves fatally injured.”