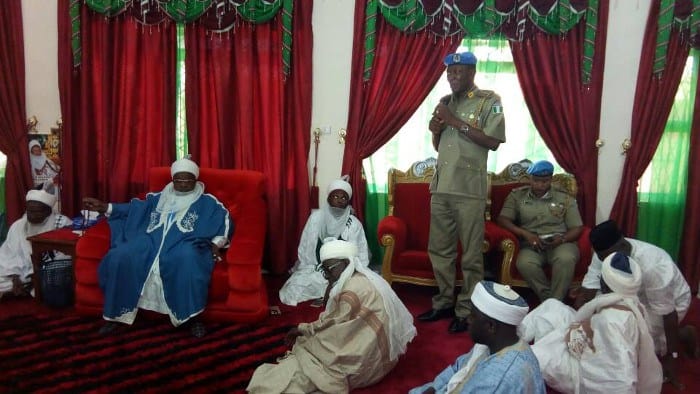 -Emir of Katsina, Abdulmumini Usman calls on President Buhari to assent to Peace corp bill.
-He describes peace corps as agent of peace and national unity.

National Commandant of the Peace Corps of Nigeria at the Palace of the Emir of Katsina. Photo: Premium Times

The Emir of Katsina, Abdulmumini Usman, has called on President Muhammadu
Buhari to sign the Peace Corps bill.

According to NAN, the Emir made the call on Thursday, describing the Peace Corps of Nigeria as agent of peace, unity and national integration.

Naija News gathered that Mr. Usman who is the Chairman, Katsina State Council of Emirates said Nigeria needs an organisations such as Peace Corps, at a time the country is facing serious crisis, adding that insecurity, hate speeches, chauvinism, agitations, quit notice, unpatriotic and selfish interest of some leaders needed to be addressed.

The emir while speaking in his palace on Thursday when the national officers of Peace Corps of Nigeria paid him a visit, said Nigeria should prove to the world that “we are truly giant of Africa”.

“Religious and tribal sentiments are the greatest enemies of this country. Until we learn how to tolerate each other, no matter the tribe or religion, we would not get it right in this country,” the emir said.

Mr. Usman, who is also the Chancellor of the University of Ilorin, said other states should learn from Katsina State, where the indigenes live happily with non-indigenes and other tribes having critical positions in the emirates.

“We should be one. We live side by side, we sit down side by side to eat and drink together here. Hausa, Igbo, Yoruba, Birom, we should remain united. Igbos and Yorubas are my brothers and sisters, I will use my last blood to fight for one Nigeria”.

The emir therefore, assured total support of the Emirates in Council and urged the President to assent to the billquickly, to help empower the teeming unemployed youth and forstall criminality in the society.

The National Commandant of the Corps, Dickson Akoh, commended the traditional ruler for supporting the mutual integration, unity and peace among the citizens.

Mr. Akoh, further appealed for the support of the traditional council for the speedy assent of the bill when transmitted to the president.

The bill had been passed by the National Assembly to turn the Peace Corps, a non-government organisation, into a government paramilitary agency.

The bill had since generated several reaction form Nigerians, while its exponents see it as an opportunity to reduce unemployment rate, critics say it is as a replication of roles already being performed by other existing agencies and establishment of another commission at a time the country is battling with non- payment of workers’ salaries.

The bill, according to NAN report, kicked against by the security agencies in Nigeria and the Peace Corps leader Dickson Akoh is currently being prosecuted for alleged fraud.

The bill is supported by the senate and other Nigerians including the Minister of Sports, Solomon Dalung, who also asked Mr. Buhari to sign to it.

The presidency has refused to comment on whether Mr. Buhari will sign the bill or not, saying it has not been transferred to the president.