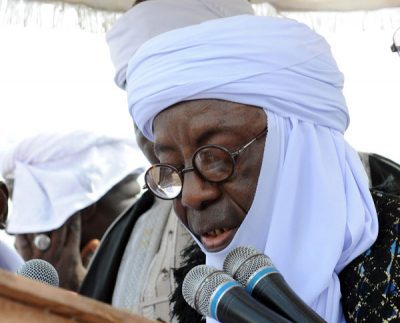 He died on Sunday at the Lagos University Teaching Hospital, LASUTH following a brief illness.

He is expected buried on Monday in accordance with Islamic rites at the central mosque at 3pm.

Late Akinola, a renowned Islamic scholar became the Chief Imam of Lagos at the age of 63. He attended the famour Morcas Arabic School from 1959 to 1961 and distinguished himself as a front line Islamic scholar and preacher.

He was also a civil servant serving in various capacities especially the Nigeria Security Printing and Minting Company (NSPMC) where he retired after 32 years of meritorious service.

Speaker of Lagos State House of Assembly, Mudashiru Obasa described the late cleric as a honest man who stood for the truth all his entire life.

In a Press Statement by his Chief Press Secretary, Mr Musbau Rasak, the Speaker said Lagos State and the Nation would miss Akinola’s honesty and commitment to national development.

Condolences have started pouring in over the demise of the Chief Imam of Lagos State, Sheikh Garuba Akinola Ibrahim (Gana V), who died yesterday September 24 at 79.

The Governor in a condolence message signed by his Chief Press Secretary, Habib Aruna, described the development as a great loss to the Muslim Community, the State and the country in general.

He said the late cleric would be sorely missed and remembered for his bold and courageous sermons which stood him out in the present-day Nigeria.

The Governor said the late cleric was a great man of God who spoke truth to power not minding whose ox was gored, and contributed immensely to the growth and development of the State.