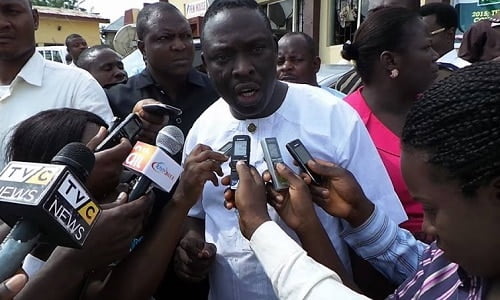 The Osun State Commissioner for Regional Integration, Mr. Bola Ilori, was beaten by some thugs at the zonal meeting of the All Progressives Congress Committee on restructuring in Akure, Ondo State.

Naija News learnt that the meeting was held at the International Event Centre, Akure, on Thursday.

Naija News gathered that the commissioner, after speaking at the meeting was attacked when he left the hall to grant a press interview outside.

The eyewitness said, “The thugs swooped on the commissioner and started beating him. They tore his dress and underwear in the process. He attempted to run away but the thugs would not let him as they held unto him. After stripping the commissioner almost half-naked, they left him with a warning that he should not join the meeting or any programme of the APC again. In fact, it was one of his sympathisers that offered him a shirt to wear.”

Irated by the inicident, the Osun State delegates disrupted the programme, shouting and pushing some Ondo APC members in the hall, saying they would not accept the assault on their colleague and that the programme would not continue until the thugs were arrested.
Ilori was taken back to the hall in a borrowed shirt.

It was learnt that the Chief Press Secretary to Governor Rotimi Akeredolu, Mr. Segun Ajiboye, and some security agents plunged into action to restore orderliness and peace in the meeting.

Ilori, speaking with newsmen alleged that the thugs were sent to attack him by the Secretary to the Ondo State Government, Mr. Sunday Abegunde, for unknown cause.

“We came here in the interest of the nation, the party calls for opinion of the people on restructuring we have done our presentation and there was no problem, only for the thugs of Abegunde, the SSG to come and harass me. ”

“If I have come here today alone, it would have been another thing. It is the SSG, Sunday Abegunde, that sent them,” Ilori alleged.

Abegunde’s reaction on the incident was sought but he directed the journalists to the state Commissioner for Information, Mr. Yemi Olowolabi.

However, Olowolabi dismissed Ilori’s claim, alleging that he (Ilori) came to the venue with the intention to cause trouble because he was not invited to speak at the programme.

“The Osun people came here with thugs, they came with charms and dangerous weapons. Why were people from Ekiti not attacked? It was very clear that they were here to cause trouble.

“We are peace-loving people in Ondo State, many people have spoken before him, there was no problem, he was not the one to speak for Osun State but tactically took over the microphone and spoke. After the incident, he even thanked his ‘army’ that they proved that they can defend themselves. This is very sad,” Owolabi said.