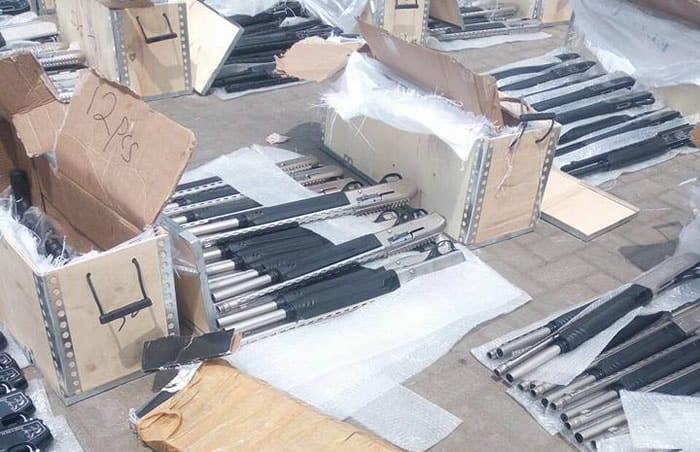 Another 2, 671 rifles illegally imported from Turkey into Nigeria have been intercepted by the Tin-Can Island Command of the Nigeria Customs Service (NCS), Lagos State.

The Comptroller-General of NCS, Retired Col. Hameed Ali, disclosed this to newsmen in Lagos on Thursday that the seizure was the fourth at the Lagos ports within eight months.

He said: “Following the increase in the number of arms seizures in recent times, the Customs Area Controller of Tin-Can Port, Comptroller, Yusuf Bashar, ordered a detailed profile of all imports, especially those coming from Turkey.

“Customs decided to follow profiling approach of 100 per cent examination on containers, especially those containers coming from Turkey.

He said the container belong to the same importer of 1,100 refiles intercepted on Sept.11, adding that investigation was underway to get those connected with the container.

Naija News gathered that the terminal operators have been ordered to quarantine the container for concrete analysis.

“The container was later transferred to the Enforcement Unit of the command where 100 per cent examination revealed 470 pump action rifles,” Ali said.

He said that the Bill of Lading of the container indicated Elbow Plumbing Plastics.

According to him, the importer of the cargo is Great Oil and Gas Ltd and the vessel named “MV Arkas Africa” owned by Hull Blyth.

The comptroller-general who assured Nigerians that Customs officers were now at alert, following the directive he issued to all Customs area controllers on Wednesday, urged Nigerians to also be vigilant.

He added that NCS will reward those who are diligent while punishment would be meted on the violators.

He said that he would be having meeting with the ambassador of Turkey discuss incessant importation of containers of ammunitions into Nigeria.

Ali said that Customs would continue to screen all containers to 100 per cent examination until 80 per cent of the Customsvagents abide with global practices, adding that some innocent importers were being affected as a result of constant false declaration of cargoes.

“We are going to subject all areas of Customs operations to 100 per cent examination to safeguard life of the citizens.