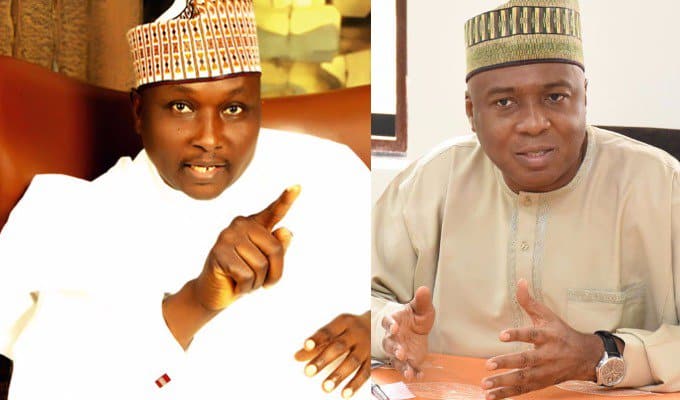 The Chief Whip, House of Representatives, Alhassan Ado-Doguwa, has condemned the Senate President, Bukola Saraki’s assertion that the ban of the Indigenous People of Biafra (IPOB), is illegal.

Ado-Doguwa said  the Saraki’s declaration was “a mere political statement” that showed the Senate President as “a controversial leader.”

In a statement on Monday, Saraki had said the Nigerian military’s declaration of IPOB as a terrorist organisation is unconstitutional.

He added that the ban placed on the group’s activities by the South-East governors did not follow due process; as such the National Assembly would investigate the crisis in the South-East.

However, Saraki applauded the military for maintaining peace in the South-East.

The Senator had said, “I also wish to state that the announcement of the proscription of the group known as the Indigenous People of Biafra by the governors of the South-East states and the categorisation of the group as a ‘terrorist organisation’ by the Nigerian military are unconstitutional and do not follow due process.”

“Our laws make clear provisions for taking such actions and without the due process being followed, such declaration cannot have effect. I am sure the President will do the needful by initiating the right process.

“This will go a long way in demonstrating to the world at large that we are a country that operates by laid down process under every circumstance. So, those who have been hammering on this point should maintain their cool.”

But Ado-Doguwa in reaction to Saraki’s pro-IPOB’s position said, “I am sure the Senate President was only expressing his personal opinion, which I further believe was not a good one in the given circumstances.

“The Nigerian Armed forces in my opinion are doing their best professionally and in the best interest of a united Nigeria. Even the south-eastern state governors have declared the activities of Kanu’s IPOB as illegal and therefore proscribed. He (Senate President) can’t cry more than the bereaved.

“For me, the recent comment made by the Senate President on this matter was a mere political statement that would only portray him as a controversial leader.

READ ALSO: IPOB is not a terrorist group – Bukola Saraki

“Considering the attacks meted out to innocent Nigerians by the IPOB group in the South-East and indeed the nationalistic conduct of the northern governors and the prompt action they took to stop possible reprisals in the North, the Senate President’s statement was to say the least unnecessary.”

Also reacting to Saraki’s assertions, the Chief of Army Staff, Lt. Gen. Tukur Buratai, maintained that the declaration of IPOB as a terrorist organisation was done in line with the nation’s constitution.

Buratai said this at the Nkwegu Military Cantonment Abakaliki, the Ebonyi State capital, on Monday while inaugurating the “Operation Python Dance” exercise for the South-East geopolitical zone.

He said, “What the Defence Headquarters said was to make a pronouncement, it was not a declaration, but this has given room for the right step to be taken. I think the government is doing the right thing, it is not that we overstepped our bounds, we are still within the limits of the law.

“What the military said was to set the ball rolling and to bring to the awareness of the public that this is what this organisation is about. I am happy that the government has done the right thing rightly.”