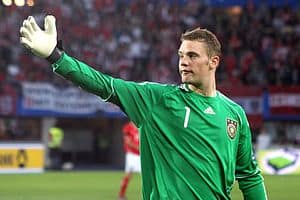 -He has therefore undergone injury on the injured foot.

Bayern Munich goalkeeper and Germany international, Manuel Neuer will be out injured until January 2018 after undergoing surgery on a broken foot.

The 31-year-old goalkeeper, fractured a left metatarsal during training and had an operation early on Tuesday.

“The operation has gone perfectly and that’s the most important thing for now.

“We’re looking forward together without our captain. Manuel will be available to us at his old strength in January.”

Sven Ulreich is expected to man Bayern’s goal in Neuer’s absence, starting with Tuesday’s Bundesliga meeting with Schalke while Barcelona’s Marc-Andre ter Stegen is expected to replace him in the German national team.

Neuer will also miss Germany’s key World Cup qualifier against Northern Ireland in Belfast on October 5, where a win will guarantee them a place at Russia 2018.

As a result of the injury, Neuer will miss Bayern’s remaining Champions League group stage games, including their key away match at Paris Saint-Germain on September 27.