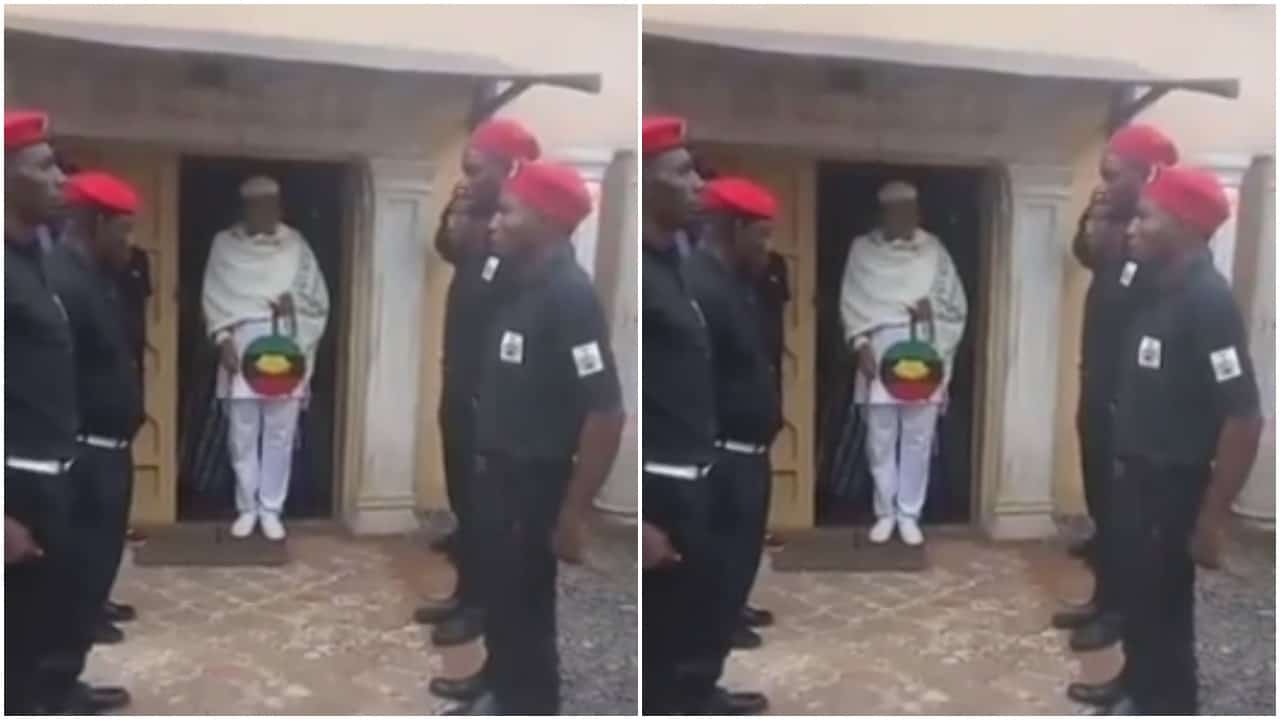 The Biafra National Guard, BNG, has threatened to match the Nigerian military strength for strength, stressing it is ready to defend the people of the South East against any form of oppression particularly from the military.

The group also faulted the declaration by the Nigerian Military, labelling the Indigenous People of Biafra, IPOB, as a terrorist group.

BNG also stated that it would not rest or be blackmailed into surrendering until the agitation for the actualization of Biafra was achieved.

The Biafra National Guard,in a statement signed by its spokesperson, Major Nkuma  has maintained it is not a terrorist group as being purported by the Nigerian government.

“It is sad that we found ourselves in a country we are considered species of terror and a country we have no right to ask for self-rule. We the Biafra National Guard believe that the declaration is the end of the road for all Indigenous People of Biafra who have been peacefully clamoring for referendum. The big question remains; are we going to watch them implement the genocide they just declared?

“It is important to clearly state that Biafra National Guard has been in existence for years and was not formed recently as claimed by Nigerian military and it is an independent self-defense group; primarily saddled with the responsibility of defending old Easterners’ as enshrined in 2007 UN charter on the rights of Indigenous People.

“IPOB under the leadership of Mazi Nnamdi Kanu is the mother of all pro-Biafra groups and as such, all pro-Biafra activists are Indigenous People of Biafra. The Biafra National Guard is Indigenous but clearly independent and doesn’t subscribe to the peaceful strategy of IPOB but fully endorsed, and respects IPOB because it is Biafra people’s wish.

“Biafra National Guard is not likely to take orders from IPOB because IPOB is peaceful unless they decide otherwise- as we have always maintained, IPOB is the representative of the entire people of Biafra. We the Biafra National Guard carries the responsibility of self-defense in Biafra land; and we are unapologetic, we don’t care what Nigeria tags the people of Old Eastern region but they should be rest assured that we must defend our lives according the 2007 UN and human rights charter.

“As thoughtless as the Nigerian military; a supposed intelligent officer that passed out of school and living in a modern world to tag a peaceful freedom fighting outfit terrorist organization is the height of the joke- Nigeria is a big joke.

“The daftness of Muhammadu Buhari has infected the Nigerian military that they both speak out of sheer hatred instead of reason or experience. It is laughable that it took UN to declare Boko Haram a terrorist organization but took a wayward soldier to declare a peaceful or non-violent people a terrorist organization. The Nigerian military can go to hell because we won’t be blackmailed; we will defend our lives at all cost and we will restore Biafra because we are freedom fighters.

“Nigerian government and her military must be taken back to the classroom or lecture hall to study history. They should be well taught that Nelson Mandela was never a terrorist; Martin Luther King and Mahatma Ghandi were never terrorists.

“They should be lectured that no freedom fighting outfit or fighter has been labeled a terrorist; it is only possible in artificially created Nigeria. Nigerian government and her military should go to UK and ask them why they never tagged Scots terrorists and they should also go to Spain for Catalonians. Must Nigeria continue to disgrace herself before the world; is Nigeria a world apart from the real world?

“Buhari and Britain should be well informed that they cannot blackmail us; if being a freedom fighter is being a terrorist, we are proud terrorists. If being a Biafran is being a terrorist; we are happy to be one but by virtue of our activities, we are not terrorists and can never be. We are Biafrans; we forbid terrorism; our culture and everything we represent forbids terrorism. Nigerian military is killing our people and we must defend ourselves to avoid our extinction.

“Biafra National Guard will never engage civilians but will oppose armed murderous Nigerian forces. We have been labeled terrorist to enable them implement the genocide against us but we will defend our lives. Nigerian government can be rest assured of self-defense because we shall never retreat or surrender till death lift our hands.

“Britain must be held to account because they are the brain behind the genocide and terrorist tag; they are backing this second phase genocide against the people of Biafra. Britain did not tag Scotland agitating for Self-determination terrorists but went ahead to force Nigeria to tag Biafrans who are like Scots terrorists. We will resist every attempt to implement this second genocide; may God never forgive us if we watched on while ethnic cleansing is carried out.”