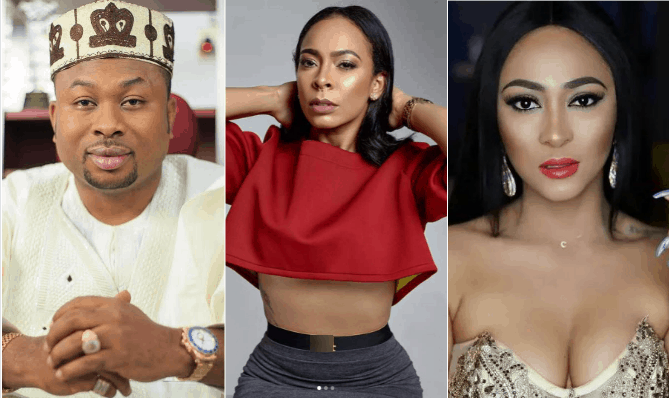 Olakunle Churchill, actress Tonto Dikeh’s ex-husband, has dismissed the rumours circulating on the social media that he is in an amorous love triangle with actress Rosaline Meurer and ex Big Brother Naija housemate, Tboss.

LIB in a brief chat with Mr. Churchill asked about the rumours, and a visibly upset Churchill said,

“Listen to me. I’m a very busy man and honestly I don’t have time for social media banter and gists. I don’t know where these stories come from and it’s been lingering for a long time, any lady that works with me automatically goes online as someone I’m dating and it’s no longer funny.

Read also: IPOB is not a terrorist group – Bukola Saraki

“I don’t know where these stories emerge from but they are not true. At the moment, I am a single man and for all you care I can hangout with 100 women if I want it’s no one’s business.

He added that Rosaline is an actress and someone he knows since childhood, adding that she was never his personal assistant as against social media speculations.

He said: “Like I said. Its nobody’s business. Let me just shut this thing down once and for all. Rose is family to me, I’ve known her since childhood before she started working with the foundation and for the last time, she didn’t break my home”.

She’s an actress, not my personal assistant as many people believe and in the real sense, a company cannot have an actress as a ‘P.A’. Anything you read online that doesn’t come from me is not true, there’s too many fake news sponsored against me by jobless people.

Read also: I am not 40 years old – Actress Eniola Badmus

My marriage crashed because of personal issues that we could resolve and I tried to fix it several times because of my son but it didn’t work out.

As for Tboss, she was present as many other celebrity at the Fire service event we did last month in Abuja so how does this translate to dating any of them. I don’t think I owe any one any explanation, when and if I am ready to get married again, my family will know not the media. I will choose to keep my life private like it used to be.

When asked about the reported domestic violence allegations against him and how often he sees his son:

“I don’t know what you are talking about. because all that is not true, I was not even in the country when she moved out of my house with my child without my consent and she left with all her things to an unknown destination. I repeat I have never raised my hand on any woman before and I will never do it no matter what happens.

“Only a weak man would hit a woman, i’ll rather walk away at that moment. And since then I’ve tried to see my son but I’ve been taking it slow because I don’t want any false claims,” he said.

Watch the video of Olakunle Churchill’s reaction on marriage crash with Tonto Dikeh: