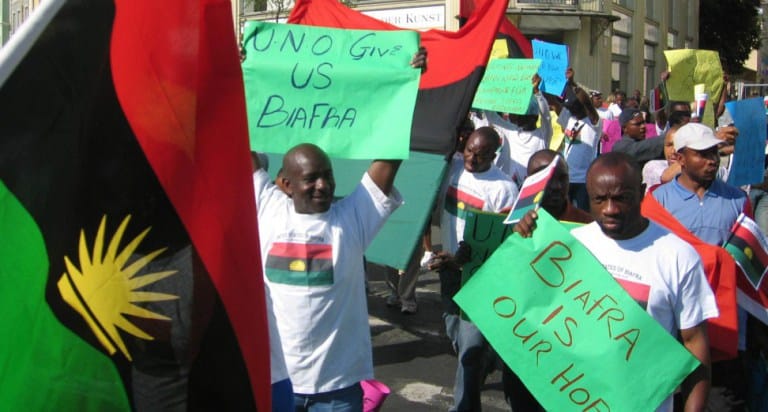 Peace cannot be kept by force; it can only be achieved by understanding. — Albert Einstein

Whoever he is, the military officer who coined the code name ‘Python Dance’ is a genius. Although an original version of the military operation, the Python Dance I, held between November 27 and December 27, 2016, no one should have looked any further than the code name to deduce the possible outcome of the army’s latest incursion into the south-east. As a rebel scientist, I’ll break this down.

Although they are a family of nonvenomous snakes, pythons, scientifically Pythonidae, can be extremely dangerous. They are some of the largest snakes in the world, and are notorious ambush predators in that they typically lay motionless to evade the notice of a passing prey but then suddenly strike when danger is least expected. Ordinarily, no one should tease the python — that is where Nnamdi Kanu and the Indigenous People of Biafra (IPOB) got it wrong. Even though it looks innocuous when motionless, a python cannot be active without inflicting harm — that’s the misjudgement of the army, the thought that the operation would run without tension.

Prior to the take-off of the operation, the Nigerian Army acted like a python, listing a raft of harmless activities to cover up its one controversial aim of the operation. David Dawandi, a Major-General and Chief of Training and Operations of the army, said in a statement on September 8, that “during the exercise, emphasis will be placed on raids, cordon-and-search operations, anti-kidnapping drills, road blocks, check points, patrols, and humanitarian relief activities such as medical outreach”. That’s the motionless python. The statement also made it clear that there would be a “show of force to curb the rising threat to national security in the south-eastern part of the country”. A “show of force”? That’s a python in ambush mode. The summary is that it was an unnecessary operation. For many reasons.

Nnamdi Kanu’s court trial is ongoing. When he returns to court on October 17, the court will hear the federal government’s application for the revocation of his bail. There is no chance Kanu will win that argument — unless Justice Binta Nyako, who granted him bail in April, wants to make a mockery of herself and the judiciary. Kanu has repeatedly violated his bail conditions, the most obvious being his prohibition from hanging out with a company of more than 10 or granting interviews. The violation of the latter Kanu has already tried to defend, bizarrely claiming that he doesn’t “grant interviews” but he only “answers the questions” of journalists because it would be “rude and arrogant” of him to keep quiet when asked a question! But no such ingenious explanation exists for the former; there are numerous footages of him among scores and hordes of people, including videos of him preaching raw hate. Kanu’s return to prison will be permanent in October, so first question to the army; why roll out the pythons against a drowning adversary?

While the pythons were still dancing, the defence headquarters rushed to designate IPOB a terrorist group without even taking a moment to find out the procedures, as laid down by the same law they claim to be enforcing. The army erred by failing to follow the provisions of the Terrorism (Prevention) Act 2011, amended in 2013, that “setting up or pursuing acts of terrorism, the judge in Chambers may on an application made by the Attorney General, National Security Adviser or Inspector General of Police on the approval of the President; declare any entity to be a proscribed organization and the notice should be published in official gazette”.

Even that move itself is an overkill. Of course, Nnamdi Kanu is very annoying — I can imagine the Chief of Army Staff watching him in one of his numerous hate videos and itching to grab his throat and strangle him. There can be no arguments that he is unstable: how can a man who so passionately preached Nigeria’s unity under Goodluck Jonathan now so vehemently champion secession? But a more careful look at him will reveal his true nature: a mere radio/internet noisemaker elevated to the status of Biafra champion by a zealous and unlawful Muhammadu Buhari government. Kanu would never enjoy half his current popularity if he wasn’t repeatedly denied bail. Kanu talks too much; die-hard rebels talk less and act more. His Biafra Security Service (BSS) is toothless; not one of the so-called trainees carried any sort of weapon. They, in fact, looked too confused to be able to withstand confrontation by a private, the lowest-ranked officer of the Nigerian army. Little wonder Kanu himself is now in hiding.

The deployment of soldiers to the south-east has caused needless tension. The death of a hard-to-ascertain number of people, the assault on suspected IPOB members (which, by the way, will go unpunished despite the army’s claim to be investigating it), the combing of buses by IPOB members in Aba for Hausa to harm, the Igbo-Hausa tension in Jos and Port Harcourt are all worrying scenarios that would have been avoided without military action. The seething inter-ethnic tension is worrisome; this is how wars start. In the past week, whether we admit it or not, Nigeria took one giant step towards a second Civil War. The good thing, though, is that the situation is still reasonably under control. To avert a total breakdown of law and order, our leaders must learn from our history and ask themselves the hard questions.

Speaking of lessons, it is hard to imagine how quickly our leaders have forgotten the role of military action in the escalation of Boko Haram from a nonviolent ideological group under Yusuf Mohammed to a ruthlessly violent one under Abubakar Shekau. The 2009 police crackdown on Boko Haram in Bauchi led to violence in Kano, Yobe and Borno states; and after Mohammed’s capture by the military and extrajudicial execution by the police, the reins of Boko Haram fell on the bellicose, blood-thirsty Shekau. The rest, as they say, is history. It will take decades for the north to recover from the ruin of this insurgency — the deaths of hundreds of thousands, displacement of at least 3million people, the humanitarian crisis, the sheer destruction of flora and fauna, the physical and socioeconomic regression. So, even if the military succeeds in taking out Kanu, the Biafra mantle will naturally be transferred to someone else, who may even be more dangerous than kanu. Tact, not force, is what President Muhammadu Buhari needs to handle Kanu and the Biafra agitation.

There are two questions the government must answer if Nigeria must remain peaceful. Why, despite his apparent weakness of character, lack of purpose, unruly choice of words, does Kanu continue commanding huge youth following? And, why, after almost four decades post-Civil War, are we still discussing Biafra? I do not have all the answers, but I’ll supply some.

First question: as I said earlier, Kanu is the number-one beneficiary of government’s misuse of power. But more importantly, Kanu’s followers are mostly made up of unemployed or unprofitably employed, disillusioned youth who have finally found someone to identify with their struggles. For the second, it must mean that the Biafra question was never addressed after the war. Buhari must think long and hard about what the Igbo want, why they feel sidelined, and what he can do to make them feel part of Nigeria.

Otherwise, a legitimate Biafra question will be left in the hands of an opportunistic Kanu, and we will lose a golden opportunity to once and for all resolve our differences and strengthen the bond of our nationhood. Buhari should let the courts decide Kanu’s fate. He must jettison the use of force and embrace dialogue — because whether we like it or not, a million pythons cannot dance away the Biafra question!