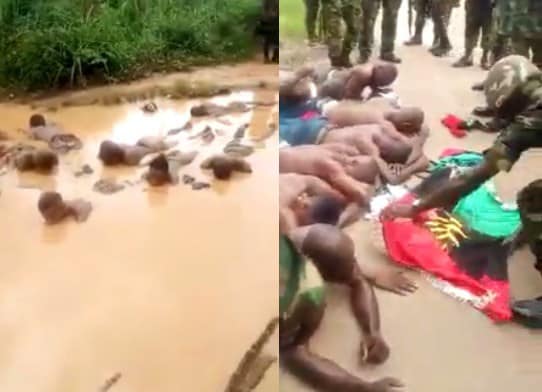 There are strong indications that the Nigerian military may not fulfill its promise that the video clip of Indigenous People of Biafra (IPOB) members being brutalised by soldiers in Abia State will be investigated and the culprits brought to book.

This is because similar human rights violations by soldiers have gone unpunished, even after the authorities had promised to punish the offenders.

A video that surfaced online on September 13 showed alleged IPOB members being beaten with sticks and forced to lie face down in a muddy pool along the road.

The video, apparently filmed by a soldier who was unhappy with the incident, showed one of the boys lying in a pool of his blood and the person behind the camera saying “this one don die o.”

But a day later, the army released a statement saying that the video was being investigated with a view to ascertaining its authenticity.

“The attention of the Headquarters 82 Division Nigerian Army has been drawn to a video clip trending on social media and other platforms purportedly showing troops humiliating some people at a check point in Abia State, Nigeria,” Sagir Musa, Deputy Director of Army Public Relations of the 82 Division of the army, said.

“The issue is being investigated with the view to ascertaining the source and the actors in the clip.

“Our Code of Conduct and Rules of Engagement are quite clear and any officer or soldier that infringed on any of such directive if found guilty, will face full wrath of the military justice system.

“We do not condone any act of indiscipline in the conduct of our operations and training exercises. Any claim of rights violation would be investigated and when confirmed, appropriate disciplinary action would be taken against the erring personnel.”

But this is not the first time such statements had been issued yet nothing was done about it. 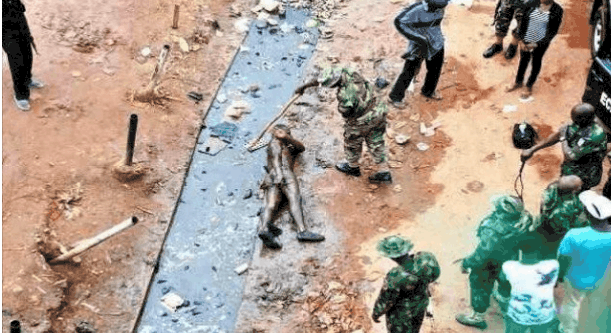 Sani Usman, Director of Army Public Relations issued a statement, first condemning the newspaper for going public with such report and as a result doing “incalculable damage to the image of the service”.

“The army has also reached out to the management of the newspaper over this poor and worrisome editorial judgement by giving this misdemeanour prominence in their paper,” Usman said. “Alerting appropriate Nigerian army authorities would have been a better option that will be met with prompt response.”

He further stated: “The Nigerian army wishes to inform the public that the perpetrators of the offence have been identified, summoned and would face disciplinary action.

“We wish to assure the public that the Nigerian army would continue to protect and respect human rights and that this regrettable incident should not be used as a yardstick to judge the entire army.

“The Nigerian army is aware of the demand by the National Human Rights Commission (NHRC) requesting for the release of soldiers involved in the unfortunate incidence of ill treatment of robbery suspected as shown on the front page of today’s Daily Trust.
“I wish to inform the commission and the public that all those involved would be released to the NHRC after carrying out our investigation in accordance with our regulations.”

Months later, when The Cable got in touch with the National Human Rights Commission, they found that the issue had more or less been forgotten.

“They told us they had identified the perpetrators, and that they would hand them over to us when they finish investigation,” an official of the NHRC said.

When Usman was asked, he said the incident had been “overtaken by events” and that the media should stop “over-flogging the issue.”

“The whole issue was blown out of proportion,” he said. “Yes, the soldiers have been charged and given appropriate punishment. We should not be over-flogging an issue that has been overtaken by time and event.”

Two years on, the soldiers who carried out the assault are walking free. On the strength of this case, there is little hope that the soldiers behind last week’s assault on IPOB members in Aba would be punished.