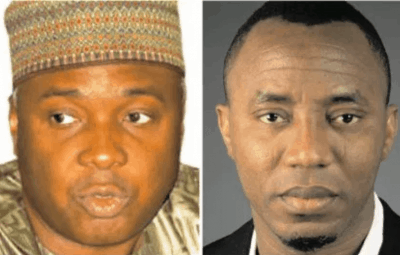 Chaos and panic ensued on Thursday on the premises of the Kwara State High Court  in Ilorin, the state capital, during the resumed hearing of the case involving the Senate President, Dr. Bukola Saraki, and an online platform, Sahara Reporters, and its publisher, Mr. Omoyele Sowore.

Sowore, according to Punch report, had approached  the high court  presided over by Justice Adeyinka Oyinloye through Falana and Falana Chambers to set aside its judgment of June 28, 2017.

Oyinloye had awarded a N4bn judgment against the online medium and Sowore, who were the defendants/respondents in the Suit No. KWS/23/2017.

The judgment was in favour of Saraki, who was the claimant/applicant.

Saraki’s legal team was led on Thursday by Mr. Tunde Olomu while Sowore was represented by Mr. Stanley Imhanruor.

Before the matter came up on Thursday, many loyalists of Saraki and a few of Sowore’s had thronged the courtroom for the proceedings.

Efforts by some other sympathisers of Saraki and Sowore who came late to gain entry into the courtroom were futile as the courtroom had been filled to capacity.

They stayed outside the court premises and started singing solidarity songs in support of their heroes.

In an attempt by the supporters to outdo each other, the place became riotous leading to a pandemonium.

Justice Oyinloye, while the pandemonium lasted outside the courtroom, ordered his police orderly to shut the court doors with an instruction never to allow anybody to enter the courtroom.

Some journalists who came to cover the proceedings were attacked by the supporters of one of the parties to the suit.

The reporters of the Africa Independent Television, Core TV and Channels TV were attacked by the thugs while attempting to enter the courtroom.

Read also: Why Bukola Saraki must be recalled – KMC

The Channels TV reporter, Mr. AbdulAkeem Garuba, told Punch correspondent that they were about to enter the courtroom when the hoodlums attacked them.

He said, “We were about to enter the courtroom when they attacked us. As they saw us, they started to shout at us, saying, ‘Who are you? What have you come to cover?’ As they were doing this, they were manhandling us and dragging the camera from my cameraman. In the process, the camera was damaged. It took the intervention of lawyers on the court premises for us to escape.”

When asked whether the attackers were Saraki supporters or Sowore’s, Garuba said he did not know.

“I don’t know them but I’m very sure that they are not from Ilorin because if they are, they would not have attacked us, particularly me as I have been in this state for so many years and known by many,” he said.

As this was going on, other journalists from the print media took to their heels.

Some people were wounded while a middle-aged woman identified as Funmi Ajayi was stripped half-naked by Saraki’s supporters in the ensuing chaos.

Ajayi  was said to have come from Lagos to support Sowore.

Passersby fled for their lives while a reinforcement of police later restored law and order.

They attacked journalists and their colleagues from the print media later reported the attack to the police where they were told that some of the supporters had been arrested.

Some of those arrested were Sowore’s supporters. They were taken away by the police on the allegations that they were in the court to disturb proceedings.

It was learnt that eight suspects who were said to be Sowore’s supporters were in police custody.

The Kwara State Commissioner of Police, Mr. Lawan Addo, confirmed the arrest of the suspects.

Speaking to journalists through the command’s Public Relations Officer, Mr. Ajayi Okasanmi, the CP said though there were policemen at the courtrooms, he had to direct for reinforcement during the resumed sitting when he got information that some people were disturbing proceedings at the court.

He added that after the deployment of the policemen, five suspects, including someone who claimed to be a journalist from an undisclosed media organisation were arrested.

Read also: Saraki vows to leave the Senate better than he met it

Addo warned the people to avoid any act that could lead to violence or breach of public peace, adding that the police would always protect law-abiding citizens but would also ensure that lawbreakers were apprehended and prosecuted according to the law.

However, the matter in the court could not proceed because Saraki’s lawyer was unable to serve Sowore’s lawyer with the court processes.

Saraki’s lawyer had told the court that Sowore’s lawyer did not furnish his client with the jurisdictional address, adding that that was the reason they were unable to serve them.

Justice Oyinloye, therefore, adjourned the suit till October 26, 2017 for hearing of the application by the appellant.