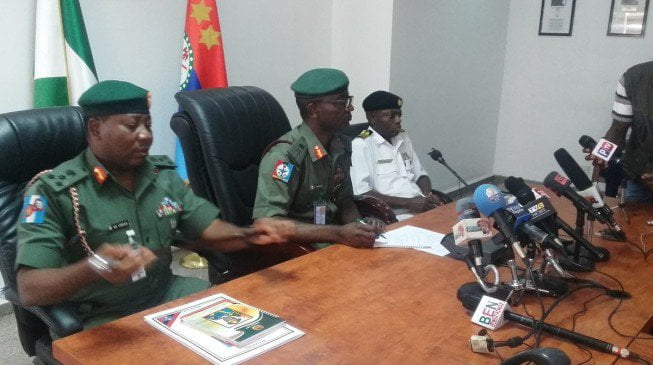 The 82 Division of the Nigerian Army, Enugu, says it has begun investigations to determine the authenticity of a video clip, currently circulating on the social media.

The video clip displays troops embarrassing some members of the Indigenous People of Biafra at a check point in Aba, Abia State.

The probe plans was made known by the Deputy Director, Army Public Relations, 82 Division, Col. Sagir Musa, in a statement made available to the press in Enugu.

Musa asserted that, if the video clip is found to be authentic, the soldiers involved in the incident would be disciplined according to military justice system.

Col.Musa said, “The attention of the Headquarters, 82 Division, Nigerian Army, has been drawn to a video clip trending on social media and other platforms purportedly showing troops humiliating some people at a check point in Abia State, Nigeria.

“The issue is being investigated with the view to ascertain the source and the actors in the clip.

READ ALSO: See details of what transpired between soldiers and IPOB at Nnamdi Kanu’s residence

“Our Code of Conduct and Rules of Engagement are quite clear and any officer or soldier that infringed on any of such directive, if found guilty, will face full wrath of the military justice system”.

Musa also emphasized the army’s knowledge of IPOB’s use of what he termed ‘manipulated’ pictures and videos to circulate their agenda, and mislead the public.

Consequently, the army spokesperson enjoined members of the public to be cautious of any information disseminated by the secessionist group.

According to Musa, “We would like to inform the public that 82 Division is also aware of the planned misinformation and propaganda arrangement by the secessionists, Indigenous People of Biafra.

“They intend to churn out pre-recorded video clips aimed at discrediting the Nigerian Army, causing disaffection among the citizens of this country.

“They will be using bogus, manipulated and photo-shopped photographs as well as video clips.

“The public should be wary of such mischief, scrutinize and report same to the Nigerian Army or any of security agencies.”

Musa added that the 82 Division was determined to ensure safety of lives and property in the course of the ongoing ‘Operation Python Dance’ in the South-East.

“The Division wishes to reassure the public that it is determined to ensuring the safety of lives and properties in its area of operational responsibility, particularly in the entire South-East geo-political zone as enshrined in the Constitution of the Federal Republic of Nigeria.

“We do not condone any act of indiscipline in the conduct of our operations and training exercises.

“Any claim of rights violation would be investigated and when confirmed, appropriate disciplinary actions would be taken against the erring personnel”.