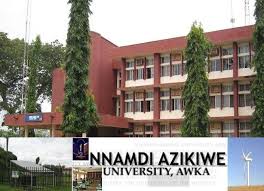 The Nnamdi Azikiwe University, Awka, on Wednesday announced the postponement of its post-UTME screening exercise scheduled to commence on September 16.

The announcement was made in a statement released by the director, information and public relations officer of the institution, Emmanuel Ojukwu, on the university’s website.

It was gathered that screening exercise was postponed due to the ongoing strike by the Academic staff union of universities, ASUU.

“It was shifted because of the current strike action embarked upon by teaching and non-teaching staff, you cannot conduct any examination when the servicing personnel are not available,” the director said.

The university said a new date for the screening exercise will be announced later.

“Candidates are requested to regularly visit the school’s website,
www.unizik.edu.ng.com or Nnamdi Azikiwe University Facebook page for
information on the new date.”

Meanwhile, Naija News had reported that the University of Lagos also announced the indefinite postponement of its 2017 post-UTME screening  earlier scheduled to start on September 18.