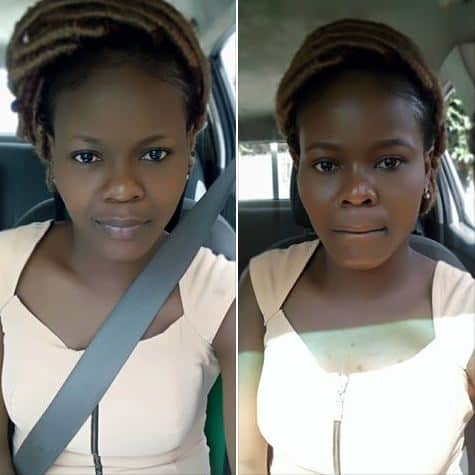 A lady, Bridget Anurika Eze recounts her awful experience in the hands of the Indigenous People of Biafra (IPOB) agitators on Facebook, on Tuesday.

Eze, whose profile shows that she works with the National Health Insurance Scheme, said she was with her colleagues on a routine inspection of facilities when they encountered the Biafran agitators at Eyinmba Junction. From the junction, Eze and her colleagues observed that the area was deserted until they saw the Indigenous People of Biafra boys harassing people.

She said, “Before we knew it IPOB boys rushed out from nowhere and attacked our Hilux, they were more than 15, carrying different weapons, one of them used a shovel to hit the Hilux hard.

“Before I could blink my eyes they opened the door and started dragging us out, I heard my oga (boss) chorused, NO please, we are BIAFRANS ” I joined them o, and was shouting, Biafra, Biafra… These boys weren’t even listening, one used a heavy big stone and was hitting my oga.”

She added that others were removing the car upholstery, claiming that they couldn’t be Biafran’s with Nigerian flag and Coat of Arms printed on the seats that way.

“I was just praying my last prayer just in case they decide to kill us. Ever seen or witnessed any case of jungle justice? Now, that’s exactly the scene today.

“The other part of the road was another set of IPOB boys damaging a truck full of goods, and another Dangote truck full of cement on fire already.

All this I witnessed/saw within 20mins.”

The agitators eventually let them go after they paid N500.

“We sped off…On our way still driving carefully, because they are everywhere, we saw soldiers in their convoy coming down to calm the situation,” she narrated.

“On entering Umuahia, the check points are tight, every living thing except the driver inside a bus, car, Keke must come down and raise his/her two hands up to be sure the person isn’t with any weapon.

She said that until there’s a legally defined way to go about the Biafra agitation, the harassment will continue. 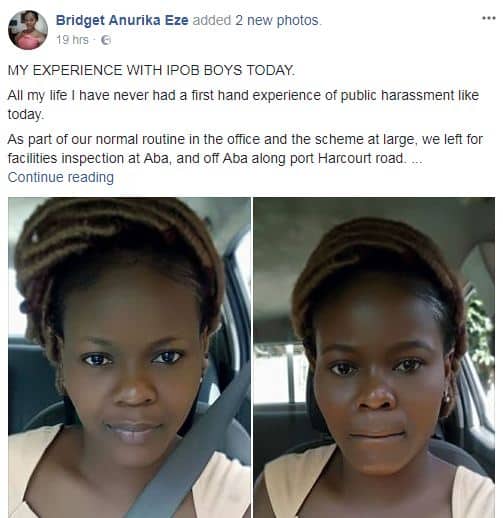