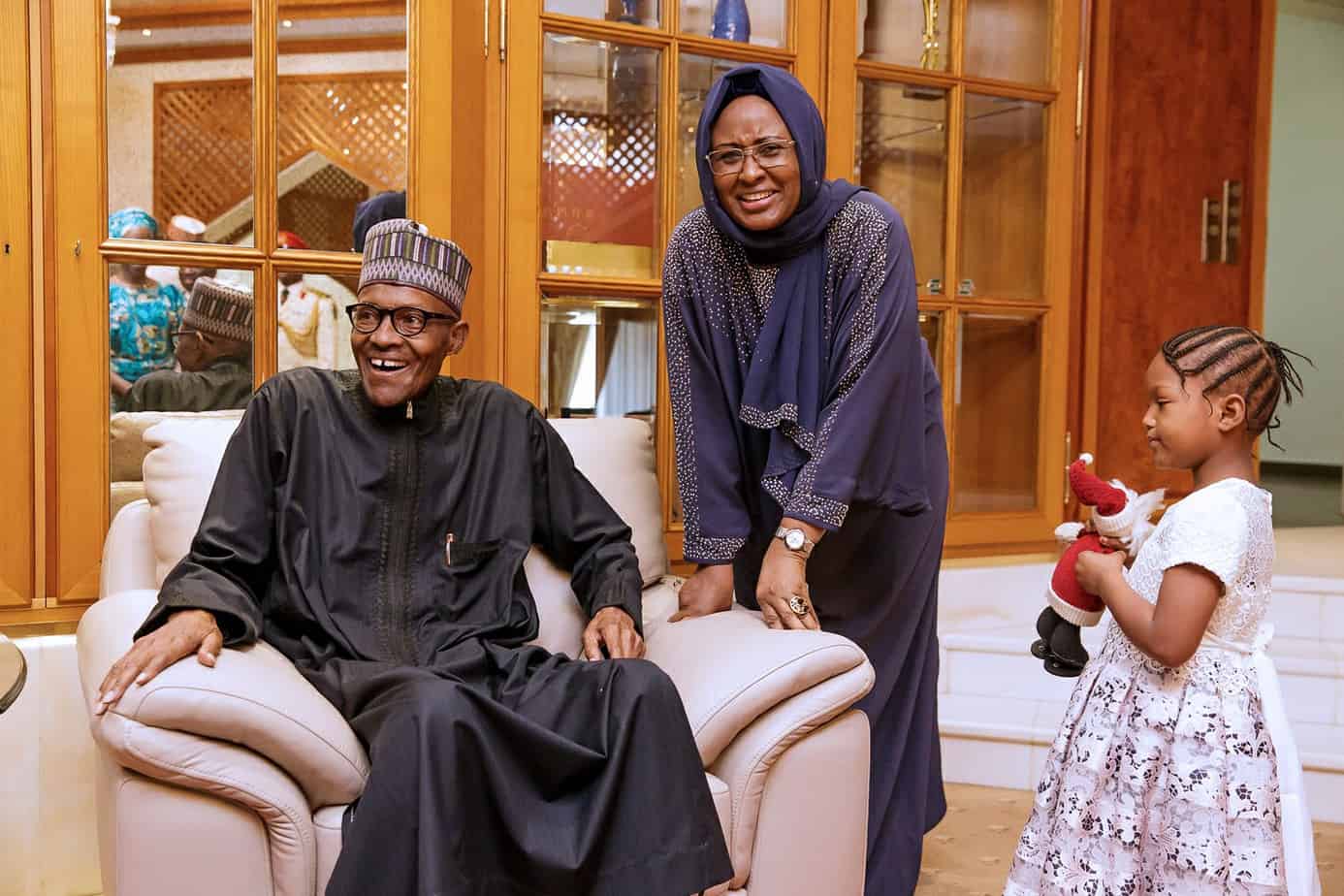 A leaked telephone conversation between Mamman Daura (The President’s uncle) and Dr. Mahmud Tukur, two of the most influential members of President Muhammadu Buhari’s inner circle, as exclusively obtained by SaharaReporters, revealed that the two members of the alleged cabal in President Buhari’s administration, have a low opinion of Mrs. Aisha Buhari, the President’s wife.

In the leaked telephone conversation between the duo, Mrs. Aisha Buhari, was extensively discussed and spoken lowly of, while discussing Buhari’s health condition while in London.

Soon after the conversation started, it quickly deviated into how they view Mr. President’s wife, whom they referred to as “Suicide Bomber from Yola” on account of her refusal to dance to their instructions.

The conversation began after Mr. Tukur initially tried to establish telephone contact with Daura five times, with the phone going unanswered before Mr. Daura answered on the sixth ring. The conversation was in Hausa.

“Salaam Alaikum (Peace be unto you), greeted Mr. Tukur.

Tukur, wondering why his calls previously went unanswered said: “You did not answer my calls. I have called severally.”

“I am surprised because I only saw one missed call from you just now. I went to pray (Na je nayi Sallah) then I saw one call. O dear! That’s why I am replying,” said Mr. Daura.

Tukur made to go into the purpose for the call, saying: That’s it. I am trying to …, adding “Yaya gajiya?” (Hope you are not too tired)

“That person? Well, it’s well. He is getting better,” responded Mr. Daura.

Wondering why the response was not categorical, Mr. Tukur said: “You said okay as if you are not sure …”

Mr. Tukur pushed again: “You said okay as if the getting well, strong enough or fast enough. What is it?

“Yes. Not 100 per cent. Not as you or I would like but of course …,” said Mr. Daura before a brief interruption.

Tukur, again, pushed, saying: “I hope he is meeting up with his treatment.”

“It is encouraging,” the President’s nephew replied.

“So, I wish tomorrow I will arrive by Allah’s grace,” said Daura.

“Yes, it’s close. Slowly, the time is close. It’s like time is on a fast-track. Our time is almost up. We are close to rounding up,” said Daura.

Tukur, mumbling his agreement with his colleague, said: “Every morning, I say a prayer”.

The conversation moved to Mrs. Buhari.

“Hmm. This thing. Is there any improvement from suicide bomber from Yola?” asked Tukur.

“Suicide?” asked Daura hesitantly, apparently unsure who was being referred to at first.

“Suicide bomber. You know that’s the way that person is referred to,” Tukur stated just before another interruption.

Daura, apparently displeased by the President’s wife, said: “It’s worse. A hundred times worse than what you know.”

Tukur wondered whether the President (Baba) will Baba talk to the suicide bomber again or not.

Daura said there is no need because the woman does not heed counsel.

Tukur agreed, saying: “This is the problem.”

“That person does not listen to anyone. What Sani Zango did (speaking to the person) and he just passed away. Then, Baba also tried. But then it turned out the same thing,” explained Daura.

Tukur said the President is very patient and has resigned to fate in matters concerning his wife. “There is virtually nothing you can do again at this point,” he twice said.

Daura agreed, saying: “It’s an absolute…(trails off ). It’s like a fixed breakfast. There is nothing that can be done. You can’t stay. You can’t go. That’s it,” he said to the agreement of Tukur, who said: “Wallahi”

“That’s why … said it’s a luxury breakfast,” Tukur said to the delight of both men, who laughed heartily.

Daura emphasized the futility of correcting the woman, saying: “This is more than a luxury breakfast. It’s an absolute fixed breakfast. This one,” following up with a plea to his friend that they should just keep praying to Allah

Tukur replied that he was told that some or his people that have been talking.

“Perhaps, it’s best to find out about the people involved like the accounts staff and others. Let’s do this and neutralize him (in apparent reference to the former Director-General of the National Intelligence Agency, Mr. Olusola Oke),” Tukur said.

Daura said there are many people bringing or providing many “information” and work is going on in that respect.

Tukur urged Daura to talk to the President come out with “the project”.

Tukur said he thought about the matter, but felt it’s best Daura speaks to the President about it.

“Don’t worry. I will speak to him about it. You know he is very fed up with this NIA thing. The way that man messed up and scattered things,” disclosed Daura.

Tukur asked if the President briefed him

Replying, Daura said: “Yes. We spoke with him. We tried to do damage limitation but it hasn’t worked. I am sorry to say.”

“Before or after the event?” inquired Tukur.

Daura said it was before the event.

Tukur replied: “Oh! That could have been something…”

Tukur agreed, before raising the matter of one Abuja-based youth.

Daura, getting the drift, said the person being discussed is a man of gravitas.

“What I am saying is that if you want inside something (information), you may call him,” advised Tukur.

Tukur explained that someone told him that the guy gives money out to a lot of people and it is the reason he has been able to find people to defend him.

“You see, for instance, Saraki has come out to speak for him. But I think if you have time. Ask that he be called to come see you.

Let him tell you things. You can ask him anything. Also, wider things. That is why I tried to have Mallam Abbah… But let me ask. How many are working for you in terms of ground work. How many people have you got?” he asked Daura, who said he has nobody.

Tukur advised him to find people to work for him in such places to provide him information. “Have them call him for you. And then ask him what is going on… if one is lucky. Even if one is not lucky. Talk to him,” he said to Daura.

Daura concurred. Tukur said the man in question has been working in the Presidential Villa for a long time and he is very bright.

“I think he will also be reliable, from what I know of him. Like I told you. He is the one I rely upon to get me information for a long time now,” disclosed Tukur.

Daura, impressed, said: “So. He is really experienced then.”

Tukur revealed that during his editorship of the defunct New Nigerian, he always asked the man in question to conduct research and he turned in viable information on different people within three days.

Tukur said he needed to tell him what he just did.

Daura promised to get reach the man.

Tukur then told him the man was reliable and that Daura need not rely on third-party information.

“This one is first party. So, if possible, call him. He is someone I trust,” he said.

Tukur moved to another subject, probably Mrs. Buhari, saying: “I am really worried about that person in the house. I just don’t know what to do.”

Daura said members of the cabal are frustrated.

“A few days ago, at the dining table, this suicide bomber we are talking about went and stood there subsequently the man refused to eat,” he told Tukur.

Tukur wondered why she would stand at the dining table.

Daura replied that those serving the President are in the habit of hiding items he is barred from eating. He added that they keep telling stories to third parties that the Presidentwill not last.

Tukur said: “Okay. Until you return.”

Daura laughed and said: “Thank God. My only consolation is that if we are praying to Allah and in good faith, things will work out. But if Allah want a different outcome, that is the way it’s going to be.”

Daura closed the conversation, saying: “Until we speak again.”