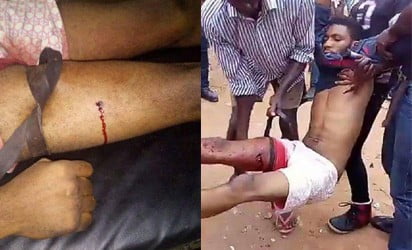 The leader of the Indigenous People of Biafra (IPOB), Nnamdi Kanu has revealed details of how millitary men attacked his compound over the weekend.

The Biafran agitator disclosed to the press that soldiers, loaded in an armoured tank and three Hilux vans shot his supporters.

Kanu added that some of his members formed human shields to prevent the soldiers from entering his house.

He said, “I was sleeping this evening (Sunday) when suddenly I was woken up by the blaring of sirens. Initially, I thought it was the Commissioner of Police who lives in the neighbourhood that was returning home. But the blaring persisted and was followed up by sporadic gun shots.

“The soldiers wanted to bulldoze their way into the palace but IPOB members formed a human shield and resisted them. They wanted to break the shield and fired at three persons and wounded others before leaving. Everybody including children was running away in confusion.

“They want to use force and beat us into submission because they have lost the argument but they will fail. They want to trigger war but we won’t oblige them because we are committed to our non- violent philosophy.”

Police have dismissed the reports that some troops invaded the residence of Nnamdi Kanu, the leader of Indigenous People of Biafra (IPOB) in Abia State on sunday.

However, the police said military personnel were only carrying out a procession to test a new armoured carrier.