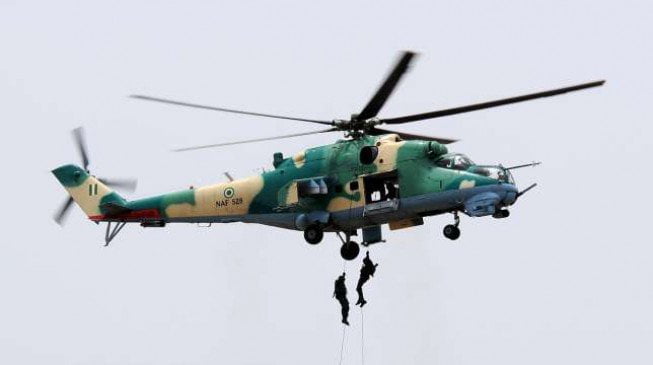 The Nigerian Air Force, NAF, says it has struck insurgents’ buildings in Borno.

Air Commodore, Olatokunbo Adesanya, the Director of Public Relations and Information, NAF Headquarters, made this disclosure in a statement on Monday in Abuja.

Olatokunbo noted that it was in furtherance of the recently commenced Operation “Ruwan Wuta”.

Operation “Ruwan Wuta” was launched reccently by the NAF to degrade the capability of the insurgents further.

“Quite a number of the insurgents had earlier been spotted, from a NAF Intelligence Surveillance and Reconnaissance Platform, entering the buildings apparently for meetings.

“The F-7Ni and the Alpha Jet aircraft were detailed to attack the target. Overhead the location, the target was acquired and engaged by the two aircraft in rapid succession. Subsequent Battle Damage Assessment revealed that the targeted structures went up in flames, killing its occupants.”

The director explained that the objective of “Operation Ruwan Wuta” was to further degrade the capability of the insurgents thereby, preventing them from regrouping to wreck havoc for our surface forces.

He explained that the operation was also aimed at softening the ground for the surface forces to subsequently move in and conduct mopping up operations.