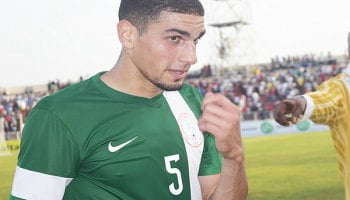 Super Eagles and Mainz 05 defender, Leon Balogun, has admitted it would have been a difficult decision if he had to choose between Nigeria and Germany but that he has no regret choosing Nigeria over Germany.

The German born player, revealed in an interview with OmaSports that he always dreamt of playing for Nigeria as a kid, even though he was born in Germany.

Asked specifically on what would have been his decision if he had to make a choice, he replied: “I can’t really tell because I’m very proud of both sides and for me while I was young and I was playing those video games, I always prefer to play with Nigeria.

“‎Because when you remember your first question how it was for me to grow up in Germany, you feel the difference sometimes, that’s what I said, and I think that is the point that connects me to Nigeria more because even though I’m German and Nigerian , that’s why you always have this strong connection to the other side.

“So this is very been difficult (to choose between both nations , if they had called him up same time) because as a footballer you want to be successful, and we don’t have to lie about it, Germany always have the assurance they’re going to go far.

“But this is a very good question because as I said in video games I always prefer Nigeria, I also had dreams of playing for the Super Eagles one day, of course with the successes in Nigeria, in Germany you see better opportunities.

“I can’t really tell you because I would have been proud to have the opportunity to play for both but if I had the choice to say Germany or Nigeria, I probably would have said I don’t want to hurt nobody. I’m staying out of both teams.”

Born to a Nigerian father and German mother, Balogun was first called up by Nigeria for a March 2014 friendly against Mexico as a replacement for Joseph Yobo.

Balogun has now become an integral part of the Super Eagles squad featuring prominently as part of the team that defeated Cameroon 4-0 in Uyo and earned a 1-1 draw away in Yaounde in the return leg.