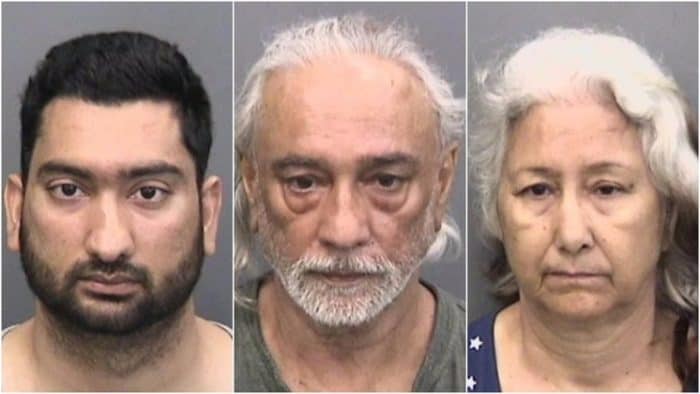 Police in Florida, United States have apprehended three Indians, the Kalsis,  following officers discovery of a manhandled woman and child being held at a home in Hillsborough County.

According to the Hillsborough County Sheriff’s office, the woman’s husband — 33-year-old Devbir Kalsi — had beaten her and his parents had flown in from India to “counsel and discipline” the woman — 33-year-old Silky Gaind — at his request.

Deputies said Gaind was “badly beaten and bruised over her entire body,” allegedly from beatings by her husband and his parents.

According to the Tampa Bay Times, police said the alleged beatings had “been ongoing for an extended period of time.”

Authorities learned about the case when Gaind called her parents in India on Saturday to tell them. Her parents then informed police in the US.

Police officers arrived at the house at around 6.30 a.m. on Saturday morning and heard Gaind “(scream) for the deputy to save her and her child,” the Sheriff’s Office said, according to the newspaper.

An officer began arresting her husband, Devbir Kalsi, but was confronted by the man’s father, Jasbir Kalsi, 67, and mother, Bhupinder Kalsi, 61.
The newspaper reported that an official investigation found that the parents had flown over from India to “counsel and discipline” Gaind.

According to the arrest report, which was seen by the newspaper, Devbir Kalsi and his wife argued late Friday night, during which he allegedly hit her “repeatedly and forcefully.” According to the arrest report, the man’s parents then allegedly began hitting her, causing bruising to the face, neck and torso. During the fight, the woman was holding her child, who was reportedly inadvertently hit in the face.

The arrest report also states that the woman was locked inside a room after the argument.

Devbir and Jasbir Kalsi face charges of false imprisonment and child abuse while Devbir Kalsi also faces a charge of felony battery and his father faces a charge of aggravated battery with a deadly weapon, for allegedly threatening the wife with a kitchen knife.

Bhupinder Kalsi faces charges of battery domestic violence and failure to report child abuse, according to the newspaper.
The trio have been booked into Hillsborough County jail.