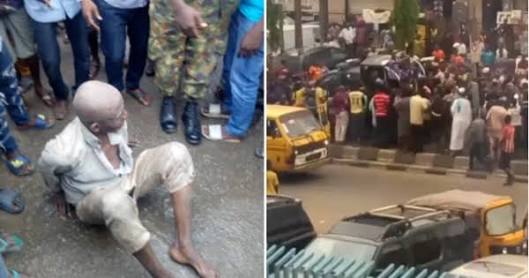 Two people on Wednesday were lynched to death by an angry mob in Mushin, Lagos State, over suspicion of being members of kidnappers and ritual killers terrorizing the state.

It was gathered that while one of the suspects was butchered and set ablaze, the other, who had been beaten to stupor, died after rescue at the police station.

Recall that on August 9, a kidnapper’s den was discovered in the Obadeyi-Ijaiye end of the Lagos-Abeokuta Expressway where two peope were set ablaze by an irate mob in the community for allegedly being syndicate of the ritual killers. On August 11, a man was also killed at the Ile Zik bus stop, Ikeja Along end of the Lagos-Abeokuta Expressway, over a similar allegation.

According to Punch, the lynching of the two suspects in Mushin started after a vulcaniser sighted a mad man discussing with another person in a tunnel at the Challenge bus stop around 6am.

The vulcaniser raised an alarm as residents gathered around the scene. But, only the mad man captured, as the person he was conversing with had fled.

After torture by the residents, the mad man allegedly confessed that his gang had been operating in the tunnel for the past three months.

Some members of the Oodua People’s Congress led a search team into the tunnel and discovered hundreds of syringes. The tunnel also linked different parts of the community.

A resident, Mr. Sulaiman Adio, said the mad man pretended to be a woman when he was first sighted by the vulcaniser.

He said, “When the youths of the community tore his clothes, they discovered that he was actually a man. He was wearing a woman’s bra and wig to disguise. The discovery came to us as a surprise and the policemen came and took him to their station at Olosan.”

After rescuing the suspect, smoked the tunnel around 6.15am and a suspected ritual killer came out. He was therefore, hijacked by the angry youths, beaten and set ablaze.
Some soldiers later came to disperse the mob.

A woman, who identified herself as Lady Gold, said four Automated Teller Machine cards and three phones were recovered from the mad man.

She said, “We don’t know that we are living in the midst of ritual killers. The state government should act fast on the ritual killers’ dens discovered across the state.
“The mad man told us before the police took him away that they used the syringes to incapacitate victims they dragged into the tunnel before butchering them”.

A source at the Olosan Police Station anonymously told Punch that one of the suspects brought to the station died due to severe injuries inflicted on him.

The Lagos State Commissioner of Police, Mr. Fatai Owoseni condemned the act of jungle justice by residents. He said five suspects had been arrested for taking the law into their own hands.

The CP said there were three suspected kidnappers involved in the actual incident, adding that they were arrested with ATM cards and mobile phones.

He said, “One of the suspects was lynched, but the other two are in custody. Five suspects, who took part in the indecent act of jungle justice, were also arrested.”