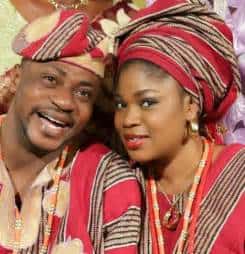 In an interview, the yoruba actress was asked why she is always featured in movies that has to do with Odunlade, as a matter of fact, most of her movies are with the famous actor, Odunlade Adekola.

The actress disclosed in the interview that Odunlade is her boss and they both share a working relationship.

Nollywood actress, Eniola Ajao dispelled the popular belief of fans and rumour that the she has an amorous affair with the actor.

The actress is saying NO to the rumour that she never had an affair with the actor, rather they have a working relationship which she respects a whole lot.

Related Topics:NollywoodOdunlade Adekola
Up Next