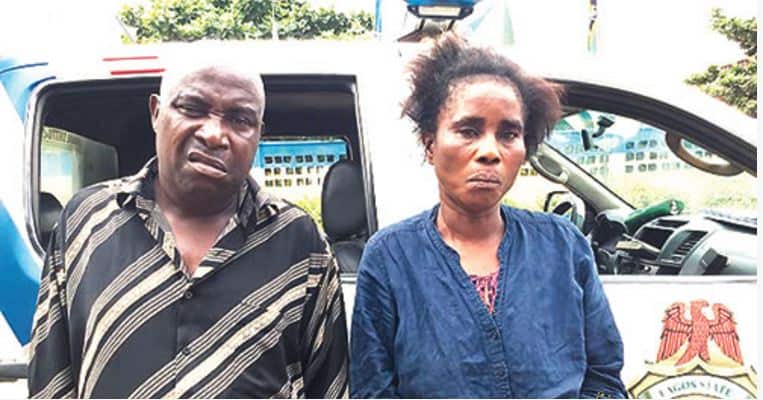 The police in Lagos State on Saturday, arrested two suspected members of a syndicate for allegedly hypnotising and stealing N120,000 from a food vendor, Rukayat Aderinwale.

Punch reports that the suspects, identified as Sunday Atanda and Fausat Tijani were arrested by men of the Rapid Response Squad.

According to the RRS, the suspects, who were arrested in Oshodi, were taking their victim to an unknown destination when she regained consciousness and called for help.

The police said, “The syndicate was arrested after a failed bid to swindle a food vendor out of N120,000 and dispossess her of her jewellery in Oshodi. The victim was accosted and hypnotised by the five gang members and dispossessed her of a purse containing N120,000, and a mobile phone. They were taking her away when the lady regained consciousness and called out to RRS officers stationed nearby.

“The officers arrested Sunday Atanda, and Fausat Tijani, a 58-year-old pure water seller in Akala, Mushin, while three other members of the syndicate escaped.”

Atanda was said to have identified other members of the gang as one Kayode, Shina and Lateef.

The suspect, who claimed to have joined the gang in order to earn a living, told the police that the group wanted to dispossess the mother of three of all valuables when they were arrested.

Similarly, two men identified as Chinasa Sunday and Osadebe Aigbe were arrested on Thursday for allegedly defrauding a woman of N85,000.

The police were said to have been on the trail of the suspects after their victim, one Grace Enitan, reported at the RRS office that they defrauded her while she was heading to Ikeja in a cab.

“Investigations revealed that Sunday and Aigbe were involved in the fraud, while their ringleader, identified as Martin, is on the run.

“The victim identified the two suspects and their roles in the scam at the RRS office.

“Chinasa, while pleading for leniency, explained that he joined the syndicate after losing his job in February 2017.

“He explained that they picked up the suspect in Olowopopo Way, Ikeja, adding that his role was to monitor victims while the scam lasted,” the police said.

The Police Public Relations Officer, ASP Olarinde Famous-Cole, said investigations were underway, adding that the police were on the trail of other members of the syndicates.

Agitations in India ahead of guru’s sentencing