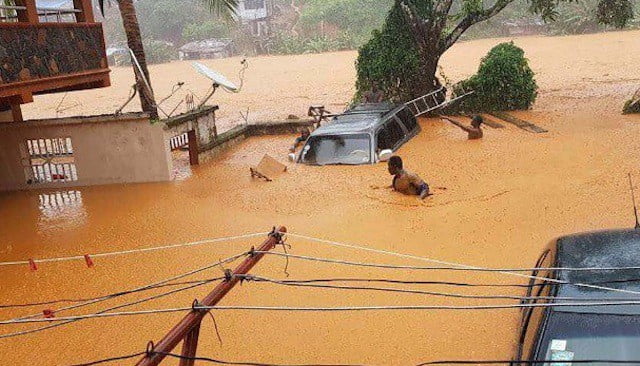 Reports have revealed that 109 children have been killed in the mudslides in the capital of Sierra Leone, Freetown and its environs.

UN Children’s Fund (UNICEF) Representative Hamid Ibrahim made the disclosure in a statement saying,  “The scale of the damage is unprecedented” and that at least 109 children were counted among the hundreds of persons killed in catastrophe that struck on Monday.

“Children have been left homeless, vulnerable and terrified. We must do all we can to protect them from disease and exploitation,” the UNICEF representative added.

“UNICEF teams, working with the Government of Sierra Leone and partners, are providing safe drinking water and sanitation, and delivering supplies including medicines, tents and gloves following the Government’s request for support.

“UNICEF is also offering psycho-social support to those traumatized by the events,” he said.

With death and destruction as aftermaths of the catastrophic mudlide, the Director and Representative of the World Food Program (WFP) in Sierra Leone, Housainou Taal, has said the UN agency “is focusing on survivors so that they can rise and move forward.”

The UN Resident Coordinator in Sierra Leone, Sunil Saigal, appointed Taal to coordinate the UN’s humanitarian response to ensure timely distribution of aid, including food and shelter, the UN said.

“In the hours following the landslides in Freetown, WFP began distributing food aid to some 7,500 people affected by disasters.

“The aid, which includes rations of vegetable oil and vegetable oil lenses for at least two weeks, has been distributed to Regent, Sugar Loaf and Mortomeh – neighbourhoods around the affected area.”

The results showed that 1,039 households from several neighborhoods in Freetown (including Regent , Kamayamah, Dworzak, Culvert and Kaningo) and 100 individuals currently in a mountain cut shelter have been affected by floods and landslides.

“Sierra Leone’s Office of National Security (ONS) estimates that more than 3,000 people have lost their homes,” the UN said.