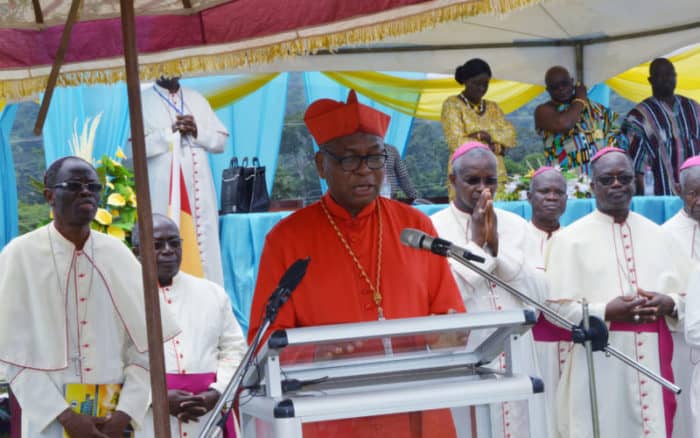 In separate declarations, Nigerian Catholic Bishops and their leader Cardinal John Olorunfemi Onayekan have urged adherence to the rules of the church and resistance of moves to introduce pop culture.

Onayekan spoke in Ghana, while the Bishops from South west Nigeria issued a statement under the aegis of Ibadan Ecclesiastical Province, after meeting in Oke Gada, Ede in Osun State.

“The Church does not gain anything by promoting a pop religion which accommodates every fad and whims generated by the entertainment industry,” said the bishops, emphasizing the significance of both Marian devotion and the observance of liturgical rubrics.

In Ghana, Onayekan said Pope Francis did not change church teaching on the rules for receiving Communion, but rather assured people who are in difficult situations that the church cares for them and the mercy of God extends to them.

READ ALSO: President Buhari: Pray for him, stop playing politics with his health -CAN

He said it was unfortunate that pressure has mounted on the Catholic Church in some places to relax the rules about the reception of holy Communion.

Such pressure, he said, can be seen in efforts to allow divorced and remarried Catholics to receive Communion without an annulment of their marriage or without abstaining from sexual relations with their new partners.

The age-old principles of the unity and indissolubility of marriage cannot be compromised to accommodate “modern trends,” he said.

“In a world going down the drain through widespread moral laxity, the church of God cannot abdicate her responsibility to uphold the high standards of the Gospel of the Lord Jesus Christ,” Cardinal Onaiyekan told Catholics gathered for the congress.

Pope Francis’ apostolic exhortation, “Amoris Laetitia” on the family, clearly reaffirms the traditional doctrine of the church, he said.

The Nigerian bishops’ message echoes that of Vatican Cardinal Robert Sarah who lamented liturgical absuses in his recent book The Power of Silence. “I deplore the long, noisy offertory processions, embellished with endless dances, in some countries in Africa,” he said. “These processions give the impression of being folklore displays, which distort the bloody sacrifice of Christ on the Cross and separate us from the Eucharistic mystery; it ought to be celebrated soberly, with recollection, because we too are immersed in his death andoffering to the Father.”

The bishops commended priests and others in varying liturgical roles that make efforts toward obedience in regard to liturgical rules and regulations.

“Liturgical worship is the lifeblood that flows through the veins of the Church gathered as the body of Christ,” the bishops said. “When it is contaminated or diluted, the body of Christ suffers in its authentic identity.”

The bishops representing the Ibadan Archdiocese, along with the Ilorin, Ondo, Ekiti, Oyo and Osogbo dioceses, had just completed their second plenary meeting. They discussed issues regarding the Church and their nation.

CatholicCulture.com reported on the resulting nine-paragraph statement on these issues.

The statement from bishops in Africa’s most populous country mentions “Enduring Commitment to Liturgical Rules.” Cardinal Sarah called last July for bishops and priests to implement the ad orientem posture at Mass, at the same time encouraging Catholics to kneel while receiving Communion.

Despite controversy and pushback in response, the call from the prefect for the Congregation for Divine Worship and the Discipline of the Sacraments was in line with the General Instruction of the Roman Missal.

Regarding Marian devotion, the bishops said, “The message of repentance, reconciliation and peace which Mary brought to us at Fatima, Portugal, 100 years ago is more relevant now than ever. All Catholics must turn up during this celebration to model that message in our families, communities and nation.”

The Nigerian bishops’ comments also encompassed proposed restructuring of Nigeria’s government and workers’ rights in light of those in areas of the country who are not promptly and regularly paid for their work.

The bishops expressed grief and sympathy with those affected by the August 6 mass murder at St. Philip Catholic Church, Ozubulu, Anambra State, during Sunday Mass, and regret over resurgence of Islamic terror group Boko Haram in northeastern Nigeria.

They also decried the degeneration of morals in society. They cited in part “The aggressive assault of new age, decadent ideologies, particularly from the Western world threaten to overwhelm our cultural and spiritual values,” and “so-called Comprehensive Sexuality Education and dubious Maternal Health procedures” in the education sector.

“Government should not spend public money on the proliferation of artificial contraceptive methods to the neglect of basic infrastructure and the grassroots health needs of our people,” they said.

The Nigerian bishops thanked God for His mercy on their nation in concluding, invoking the Blessed Mother: “May Mary, Queen of Nigeria, intercede for our country for justice peace and harmony both now and in the future.”