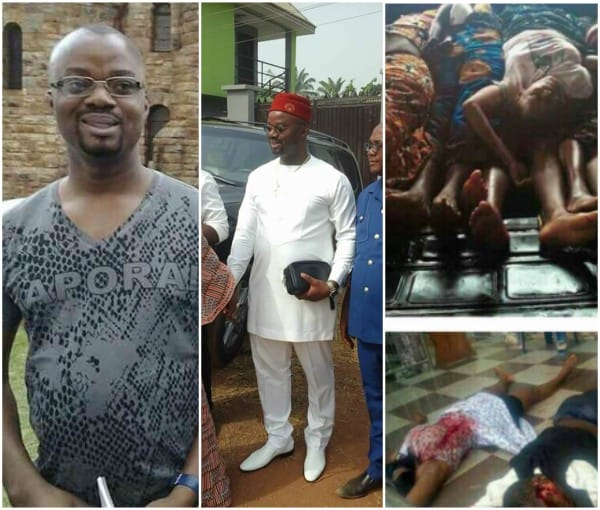 THE Anambra State Police Command has invited Chief Aloysius Ikegwuonu, a.k.a Bishop who is said to be the object of attack launched by suspected gunmen when they attacked St Philip’s Catholic Church, Amakwa Ozubulu in which 13 people lost their lives and many injured.

Ikegwuonu’s father was also among the 13 people who lost their lives during the cruel attack in which about 30 parishioners were wounded.

The information was revealed by the Anambra State Police Public Relations Officer, Mrs. Nkiru Nwode, yesterday. She said that Ikegwuonu, popularly called ‘Bishop’, is expected to appear at the police headquarters in Awka on Friday.

Nwode was however quick to clarify that the invitation to Ikegwuonu could not be taken to mean arrest, as the police had no reason to arrest him.

Ikegwuonu, who left the state before the attack on the church he built for his community, was said to have returned to the state last Saturday and attended the first Mass at St Philip’s on Sunday.

Meanwhile, as earlier reported by Naija News, Bishop has visited the victims of the attack in various hospitals where they are receiving treatment. Each of the 44 victims were, yesterday, given N50,000 by the diocese to alleviate their problems .

Catholic Bishop of Nnewi Diocese, Most Rev Hilary Odili Okeke, said the committee would visit all the victims in different hospitals to know their needs with a view to offering a helping hand to all of them.

Okeke disclosed that the committee has the mandate to ensure that every help provided by groups and individuals to the victims would be deposited into a central account called Ozubulu Casualty Charity Fund provided by the committee.

He said: “Many people and groups in the church are helping the victims. The state government has promised to pay into that account. These people eat and that is why we give them money. The families of the dead will not be forgotten and the committee was also charged to be accountable in the discharge of its duties.”

Reacting to Ozubulu Youths Association, OYA, protest over the reopening of the church for service, while investigation is still being conducted, Bishop Okeke queried whether the protesters were Christians at all stressing the need to worship God in all situations.