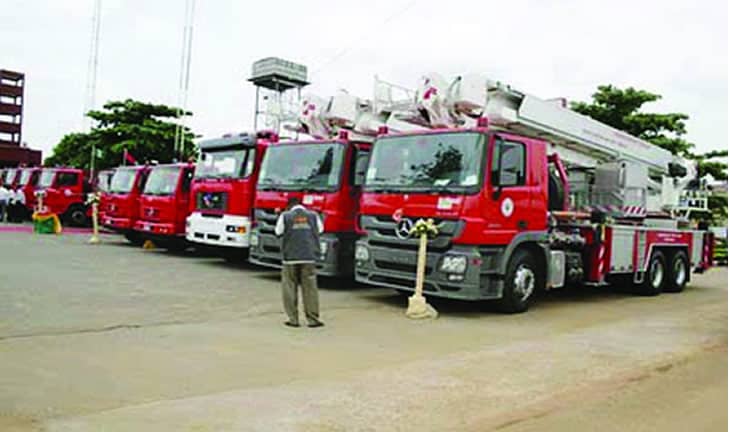 Anebi made the advise during the visit of members of the House of Representatives Committee on Interior, to the Fire Service headquarters on Monday in Abuja for oversight.

He disclosed that at present, only 15 states in the country had fire service stations.

Anaebi said that Nigerians are vulnerable to dangers of fire outbreak, there is therefore a need for the adoption of precautionary measures.

“Cases of fire outbreaks in Nigeria which always leave a lot of destruction in its wake, both in human lives and property abound in recent time.

“Some states don’t have functional fire fighting equipment and you need to also help us talk to the governors, because when we approach them they think we are coming to collect their job,” he said.

The fire boss also urged Nigerians to subscribe to the Fire Alert System (FAS) application introduced by the service to fight fire outbreak.

He said that the call was in view of the need to facilitate prompt response to incidents of fire across the country.

According to him, the FAS application is designed to automatically trigger an alert to the fire service office whenever smoke is dictated.

“By this alert on our system we will be able to identify the exact location of the fire outbreak with an indication of the phone number of the place.

“While the application is alerting the fire service office, it is also sending an alert to the owner of the house on fire.

“Any home, institution, or facility that subscribes to this application is safe,” Anaebi said.

The Chairman of the committee, Rep. Adams Jagaba, said that the house was committed to amending the laws to ensure enhanced performance by the fire service in the country.

Jagaba said that the existing Fire Service Act was obsolete and did not protect the 2,180 members of staff of the Federal Fire Service.

According to him, the bill must take care of the welfare of the staff of the Federal Fire Service; it is unacceptable that little or no compensation for officers who sustain injury in the course of duty is provided.