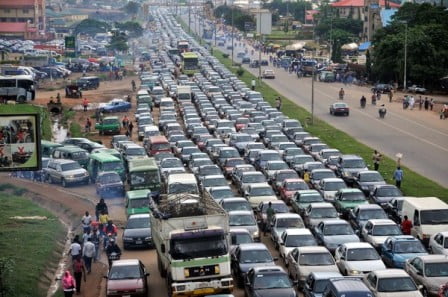 Some commuters at the Nyanya Bus Terminal in Abuja are demanding tighter security at the station due to what they describe as inadequate security arrangement at the location.

They say that security reinforcement at the terminal would safeguard the lives of passengers and other users of the station.

The terminal was reopened on July 4, after it was shut in April 2014 following the bombing of the place by Boko Haram.

The bombing, according to the Abuja Emergency Management Agency, left more than 70 people dead and almost 200 others severely injured.

Mr Godwin Agi, a commuter, told NAN that the traumatic experience of the 2014 bombing had prevented him from going to the station to catch a bus before now.

“To be frank, I was afraid of coming into this terminal to board a bus, but from the new arrangement, people are becoming more and more confident coming here.

“However, I can say I am not very satisfied with the security arrangement here because for me, there is really nothing here that can safeguard passengers’ lives.

“Unless there is a hidden security system that has been put in place here that we cannot see or do not know about.

“I cannot see any proper security apparatus in place.”

Agi urged the operators of the terminal to create an atmosphere conducive for passenger’s use by keeping the environment clean and providing shelter where passengers could take refuge from the rains and the heat of the sun.

READ ALSO: Do not underestimate Fayose’s threat against the APC -Olusegun Osoba

Another passenger, Mr Sunday Akunjo, called on the management of the terminal to show commitment to safeguarding the lives of passengers at the station by ensuring that its workers constantly monitored the Closed Circuit Television (CCTV) cameras installed in the place.

According to him, it is not enough to mount the cameras and other security equipment in the station if they will not be deployed toward ensuring the security of lives and property.

“The CCTV and other security gadgets are manmade and require continuous monitoring in the control room.

“I am of the view that the operators be more committed because they must be active to be able to utilise the gadgets.”

He said that the presence of a military post or patrol around the area would continue to boost security in the terminal.

He urged the operators to ensure that the activities of touts were discouraged as it would help strengthen security in the area.

However, another passenger, Mrs Ebere Opara, expressed joy that the terminal had been reopened after a lengthy closure and congratulated the authorities for installing security gargets at the terminal.

She said: “I am very happy with the security arrangement here and I know that the place is well secured now.

“So I feel safe coming to this place to take a bus to my destination.

“Nigerians should not be afraid to use the terminal because I think that the place is ok for us.

“At first I was afraid to come here, but upon seeing the security measures in place here, I felt safe.

“I am happy that the place is neat, organised and devoid of touts.”

Responding, Mr Salisu Muktar, the Operations Manager, Nyanya High Capacity Bus Terminal, said activities at the terminal were picking up when compared to commuter traffic at the beginning of July when the station was reopened.

“We do not have problems with patronage now because passengers are really coming here.

“We have security men at all the entry and exit points; our taskforce is also doing its job by ensuring that private vehicles are not parked at random.

“We have a security system in place to ensure that we safeguard the lives of commuters coming here to board the bus.

“At the beginning, we faced the challenge of patronage, but we dialogued with other unions operating in the area and agreed on certain issues.’’

He said part of the agreement reached was to allow members of the National Union of Road Transport Workers (NURTW) to operate inside the terminal.

Muktar said it was also agreed that the other two unions – the Self-Employed Commercial Drivers Association and the National Association of Road Transport Owners would operate outside the terminal.

He said the terminal management was currently collecting 5 per cent dues from every NURTW vehicle loaded in the terminal.

The operations manager added that taxis loading at the terminal were for long distance journeys.