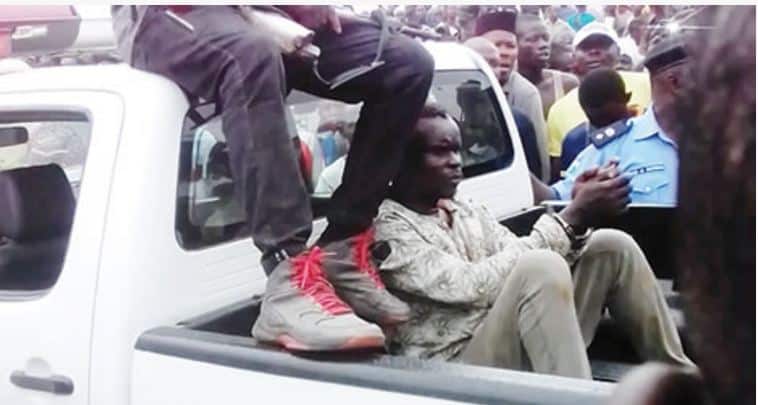 -Three persons have been arrested by the police in connection with suspected kidnappers’ den which was uncovered on Tuesday.

Three suspected persons have been apprehended by the police at the suspected kidnappers’ den and ritual killers, discovered by residents of Obadeyi-Ijaiye, end of the Lagos-Abeokuta expressway.

It was gathered that two of the suspects, a woman and a man, allegedly disguised as mentally deranged persons, but the man later confessed to being a member of a kidnap syndicate.

It was learnt that three phones, an Automated Teller Machine card and two loaves of bread, were recovered in a bag found with the woman, while the man had some clothes in his bag.

Recall that the kidnappers’ den, an uncompleted building was discovered around 7 am on Tuesday, where the residents of Obadeyi-Ijaiye barricaded both ends of the canal after a highway sweeper alerted the residents to a woman’s voice calling for help in the canal.

It was reported that five persons came out from the drainage channel, two of them were set ablaze by mob while three others were rescued by the police.

Punch reports that, the state Commissioner of Police, Fatai Owoseni, said it was too early to tag the building a kidnappers’ hideout, adding that “scientific investigations” would be carried out.

Around 10pm on Tuesday, the police succeeded in dispersing the crowd, which resumed in the early hours of Wednesday.

A resident, Bolaji Adams, told Punch correspondent at the scene that a mad woman was seen moving towards the drains at about 11am and people confronted her.

He said, “The woman should be in her 40s. She wore tattered clothes and had a bag. We saw her going towards the drainage channel. When we checked the bag, we found two loaves of bread, some pieces of fish, three phones and an ATM card.

“People did not even listen to her; they started beating her. Policemen intervened and she was rescued.”

Another eyewitness, Oluwaseun Aluko, added that a man wearing wigs was caught about 30 minutes later.

Aluko said, “In my observation, the woman was taking the food to other members of the gang. What is a ‘mad’ woman doing with three phones? As we continued to watch, the man suddenly appeared around the drainage channel. Some people confronted him, but he was talking incoherently. We saw some clothes and used exercise books in his load. We decided to let him go.”

Aluko said as the man was going, somebody charged the crowd that he should be interrogated further on the contents of the load.

“Lo and behold, we removed the wigs he wore and saw his natural hair. As we wanted to beat him, he confessed that he was a member of the gang. He made the confession in the presence of policemen, who took him away.

“There are still many suspects lurking around the drain and we won’t leave until they are all apprehended. After all, one of the suspects arrested yesterday (Tuesday) said they were more than 20,” he added.

A trader and resident, Abiodun Moshood, said a man, who identified himself as a carrier, was nabbed around 11pm on Tuesday, adding that the man, who wore only underwear, claimed to have come from the Abule Egba area to buy food.

“Some people are ready to go into the drains. The police did not allow them and they are afraid to go inside. They (policemen) should go and arrest the real suspects,” a resident, Stephen Cornelius, said.