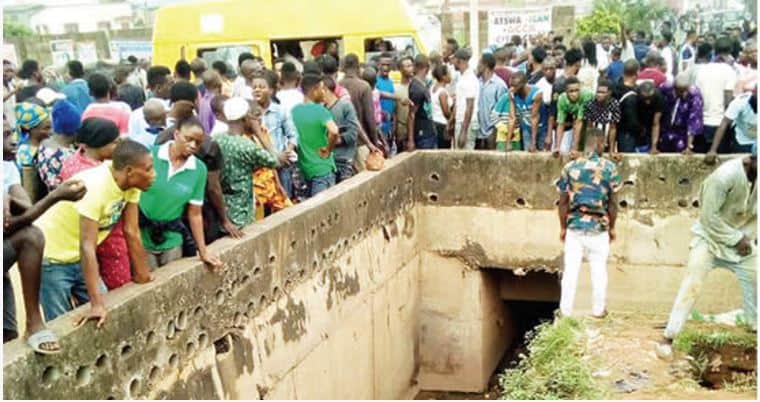 -Police are on top of the case

A suspected kidnappers’ den on Tuesday, was discovered by residents of Obadeyi-Ijaiye along Lagos-Abeokuta Expressway.

It was reported that clothes, bags, slippers and several other items were found in an uncompleted building at the end of a tunel in the area.

It was learnt that the some residents barricaded the hideout from 7am till evening, during which five people, suspected to be kidnappers and ritual killers, were apprehended while trying to escape from the tunnel, which was part of a canal in the area.

It was gathered that two of them were set ablaze by angry mob while policemen rescued three others from the scene.

According to Punch, a highway sweeper with the Lagos State Waste Management Agency was on morning duty when she heard the voice of a woman calling for help from the canal.

The canal linked the two sides of the expressway.

The sweeper was said to have raised the alarm, which drew the attention of residents and security guards attached to a bank along the expressway.

A resident, Bola Salaudeen, said that as people maintained vigilance at both sides, one of the suspects came out around 8am.

Salaudeen said, “People asked him what he was doing in the canal, but he insisted he would not say anything about his mission there. They demanded to know the whereabouts of the woman calling for help; he said he would never divulge any information even if they killed him.

“Despite the beating he got, he didn’t disclose any information. Some angry boys put a tyre on him and set him ablaze. As the fire raged on, another suspect came out from the other end of the canal. He said they were about 20 in the canal. The policemen did not allow him to say more than that before they took him away. Around 12pm, two other persons fled from the canal. People chased and caught them. They were also rescued by the police.”

A mechanic, who identified himself only as Friday, said some members of the Oodua People’s Congress eventually summoned up courage and went into the canal.

“They discovered that there was a gate in the middle of covered area of the canal. They saw another suspect there. They dragged him out and a mob set him ablaze. We believe more people are still in the canal,” he added.

Punch correspondent heard a man at the scene of the incident saying the abducted woman was almost unconscious by the time she came out and was rushed to a hospital.

But other eyewitnesses, said no woman was rescued.

One of eye witnesses, Sumbo Kolade, said people wanted to storm an uncompleted building beside the canal after some human effects were discovered there.

He said, “Policemen didn’t allow people to enter the building. New clothes, slippers, bags and some other items were found there. It is possible those items are effects of victims they had abducted.

“The mob threw stones and bottles at the building. In the process, an object hit a man, who wanted to have a glance at the items inside the building. The object inflicted a cut on his back.”

Read also: 2 quacks who performed surgery on a woman arraigned

Punch correspondent was told that the occupants of the ground floor of a two-storeyed building at the back of the uncompleted building had moved out because of flood.

However, those who live on the other floors declined comments when our correspondent asked if they were aware of any unlawful activities in the vicinity.

A shop owner, Amira Gbadebo, said, “The police should interrogate residents living around that canal. A lout who managed to enter the building said he saw bloodstains on some clothes found there. I was surprised that criminals could be hiding in a canal. Their victims are usually people who go out early in the morning and return home late.”

A community leader, who did not want his name in print, said a similar discovery was made at Ahmadiyya bus stop – some distance away from Obadeyi – in 2008.

He said, “When some of the suspects were arrested then, they claimed that they had killed a lot of people and that they supplied their body parts to some highly placed Nigerians.”

The Lagos State Commissioner of Police, Fatai Owoseni, who visited the scene, said the police would carry out scientific investigation on the items recovered, adding that it was too early to say that the tunnel and the building were used for ritual or kidnapping purposes.

He said, “At about 9am, there was a shout from a female in distress under that tunnel. The people in the area contacted the DPO who rushed to the scene.

“The DPO and the crowd removed the woman. While they were doing that, they found out that two persons were also coming out from the tunnel.

“They believed those people were pursuing the woman. When the police wanted to take them into custody, the crowd surged and put fire on them. A policeman was badly injured.

“Reinforcement got there and trailed that tunnel to the building, where they saw clothes and bags. The building looks like a place where criminals share their loot.

He said about seven persons that emerged from that building are currently in police custody, adding that thorough investigations are on-going while sniffer dogs have been sent to the place.

He urged the crowd to stop jungle justice.

Lassa Fever: Pregnant woman, one other killed, 100 others under watch in Lagos