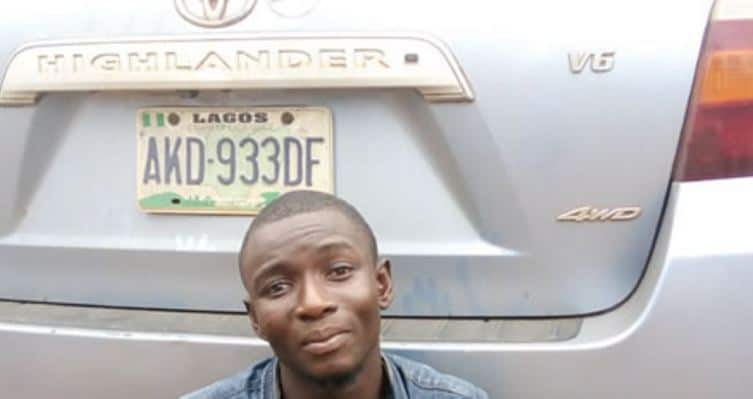 It was gathered that the suspect was arrested at Agodi juction, Ibadan on his way from Lagos by detectives from Apo police division, Abuja in collaboration with the Oyo State Police Command.

Ayo, who changed the plate number of the vehicle, drove it to Ibadan where he picked four passengers going to Lagos.

According to Punch, the Federal Capital Territory police spokesman, Anjuguri Manzah, explained that the owner of the SUV, Mrs. Adenike Sani, had left the car with Ayo at a car wash at the Apo Resettlement Centre, Abuja only for the attendant to disappear with the vehicle along with a Tecno phone belonging to a lady.

Detectives swung into action on geting the report and tracked the vehicle to Oyo State where it was recovered and the suspect nabbed.

Ayo told Punch correspondent on Monday that he stole the SUV to get back at the management of the car wash facility for planning to fire him.

“I took the vehicle to get back at the owner of the car wash because he had asked another person to take over the facility’s management. I was afraid when I got to Lagos and I decided to bring back the vehicle, but I was stranded,” he stated.

The 23-year-old said he conveyed four passengers to Lagos from Ibadan and charged them N500 each to raise money to fuel the SUV.

Asked how he managed to beat the many security checkpoints on the highway, Ayo explained that he refused to stop when waved down by policemen.

Read also: Here is a breakdown of all the cash, properties EFCC traced to Diezani

“Policemen stopped me about five times, but I refused to stop. Please forgive me, I will change. I will learn a skill and work,” he pleaded as policemen laughed at him.

Manzah advised motorists against leaving their car keys with car wash attendants, noting that incidents of car theft were on the rise.

He recalled that the police on July 24, 2017 also recovered a 2003 Toyota Corolla which was stolen from where it was parked at the Apo Resettlement Centre.

“The owner parked the car outside a shopping plaza in Apo and removed the battery, but by the next day, it had been stolen. But the car was recovered at Garki, Abuja by our men,” Manzah said.