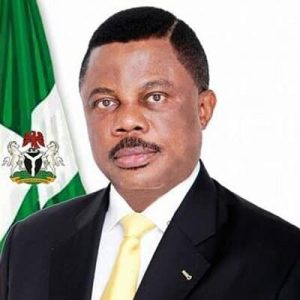 Gov.Willie Obiano has drawn the battle line as he dares the Indegenous people of Biafra group over the November gubernatorial elections in Anambra State even as he inaugurated his campaign team amidst threats by the IPOB group that the scheduled elections will not hold.

A former National chairman of APGA, Chief Victor Umeh, was appointed the Director-General of the campaign organization and is to lead the re-election bid of Gov. Willie Obiano of Anambra in the Nov. 18 governorship poll in the state.

Other members of the team which was inaugurated in Awka on Tuesday, include the Deputy Governor of Anambra, Dr Nkem Okeke, members of the National Working Committee of APGA, Willie Obiano Support Group, APGA Youth and Women wings.

The inauguration comes weeks after the Indigenous People of Biafra (IPOB), and its leader – Nnamdi Kanu, issued a threat urging the people of the state to boycott the forthcoming election.

During the inauguration, Obiano urged the team to be dedicated and go all out to mobilise the people for APGA and his administration.

He said the people were specially selected and that he would rely on their strategies to make progress in the campaigns.

He advised members of the team not to be distracted by the crisis in the leadership of APGA as the matter had been settled by the courts.

He said Obiano’s achievements in his first term in office definitely makes him deserve a second term.

He promised that the committee would comb every village and  settlement, engage in serious grassroots mobilisation and information dissemination on the good works of the governor.