-Bolt defeated in 100m finals of the 2017 world championships.

-He is still regarded as one of the best to ever grace the tracks.

Not many saw it coming but Justin Gatlin who is making his comeback after serving punishment for drug use, beat many people’s favourite, Usain Bolt in the 100m finals at the IAAF championship on Saturday.

Gatlin is now 35 and his two bans date back to early in his career. The first was in 2001 for Adderall, a drug containing an amphetamine that Gatlin said he had taken since childhood to combat attention deficit disorder. The United States Anti-Doping Agency banned him for two years, later reduced to one.

But in 2006 Gatlin was banned for eight years, later reduced to four, when he failed a test for the banned steroid testosterone. He returned to the tracks in 2010.

Following his victory at the world champioships, Gatlin was booed when been presented with his gold medal while third place winner, Bolt was praised to the roofs.

Gatlin however claimed not to be bothered by the boos of the London crowd. “I tuned it out through the rounds and stayed the course,” he said. “I did what I had to do. The people who love me are here cheering for me and cheering at home. 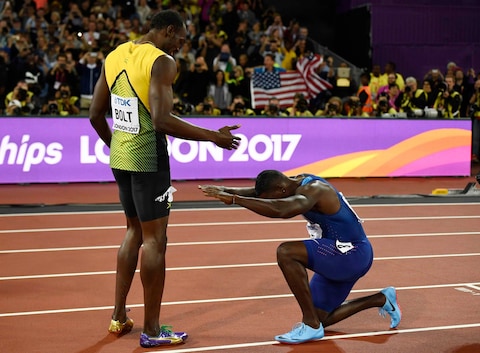 Even though he only won the bronze medal in the 100m finals,with Christian Coleman coming in in second place, Usain Bolt will still go down as one of the greatest ever to grace the tracks.

Telegraph describes his retirement as thus: This is the other story that ended here (the world will hope): the implausible spectacle of a sprint champion – the winner of three consecutive 100m-200m Olympic doubles – stepping away from global championships without a positive dope test against his name. If Bolt has raised track and field’s showbiz rating off its usual chart, his ‘clean’ medical history had kept the sport’s dignity just about alive.

He retires after the 2017 championships but his legacy will definitely live for many years to come with many struggling to measure up with his speed and brilliance on the tracks.