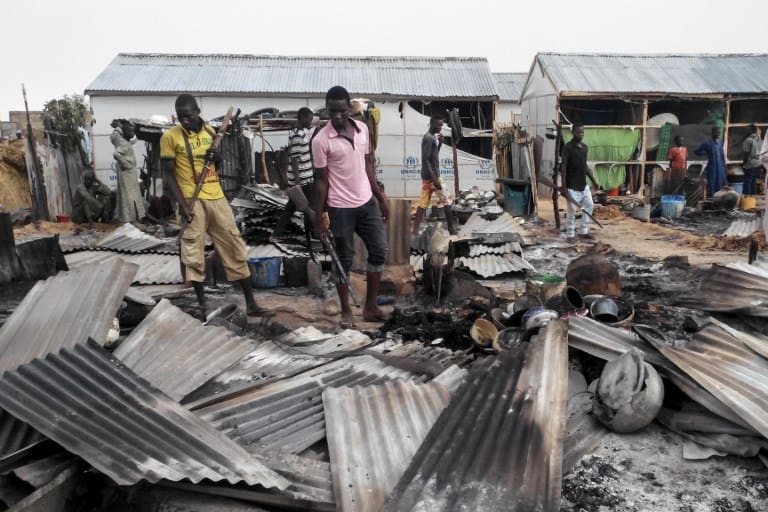 This file photo taken on June 08, 2017 shows armed members of a local defence group inspecting the damages of a suicide blast in Maiduguri. Photo: Nigeria News

At least 69 people are known to have died in a Boko Haram ambush of an oil exploration team in northeast Nigeria, as three men kidnapped by the jihadists made a video appeal.

Experts said the attack — Boko Haram’s bloodiest this year — underscored the persistent threat it poses, despite government claims the group is a spent force.

“So far the death toll stands at 69,” said an aid agency worker involved in the recovery of bodies after the attack in the Magumeri area of Borno state on Tuesday.

The worker, who asked not to be identified because he was not authorised to speak to the media, said 19 soldiers, 33 civilian militia and 17 civilians were killed.

“The last body was recovered Friday in the bush in the Geidam district of neighbouring Yobe state, which is several kilometres from the scene of the ambush,” he told Nigeria News.

“It shows the victim, who had gunshot wounds, died after trekking a long distance. There could be more such victims in the bush.”

Another source with knowledge of the rescue operation gave the death toll as “70 or more” and also said it was unclear whether all the victims had been accounted for.

“It’s a confirmation of the boldness and reassurance that Boko Haram has managed to gain over the last six weeks,” said Yan St-Pierre, from the Modern Security Consulting Group.