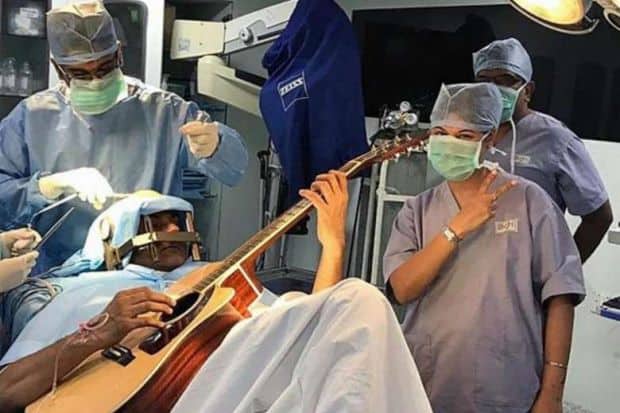 Prasad playing the guitar during his surgery

An Indian musician played his guitar as doctors at a hospital in the southern city of Bengaluru carried out a brain surgery on him to cure his crippled fingers of a rare movement disorder.

The operation, recently conducted by surgeons at the Bhagawan Mahaveer Jain Hospital on 37-year-old Abishek Prasad  was a success.

Doctors revealed that the surgery was the first in India.

Prasad who was wide awake during the surgery, entertained the busy doctors by playing the guitar.

The guitarist who had been suffering from “guitarist dystonia” for quite some time, has now been certified cured of the neurological disorder by his doctors.

Believe it or not! This Indian musician plays guitar as doctors perform brain surgery to cure his crippled fingers https://t.co/FdcSyIGH9R pic.twitter.com/6oZOFceHKK

According to Britain’s Dystonia Society , musician’s dystonia is caused by the brain sending wrong information to the muscles, characterized by involuntary, prolonged muscle contractions, resulting in the affected parts of the body twisting into abnormal postures,.

Prasa developed musician’s dystonia in 2015, while pursuing his music passion, which affected three fingers of his left hand. Hence, he was forced to abandon his passion for some time.

“Three of the fingers of my left hand — middle, fourth and the little finger — used to get stiff and stuck while playing the guitar. I was not able to follow my passion due to this,” he told the media.

Neurosurgeon Sharan Srinivasan addressed  the media saying, “Such surgeries require the patient to be awake and perform the function that is triggering the brain to misbehave. The idea is to gauge the patient’s reaction to the surgery as this disorder is specific to a task”.

Prasad is glad and excited that he will once again be able to pursue his passion of playing guitar.

“But now it’s a great feeling for both me and the doctors. It was 100 percent result on the operation table itself. I’m very excited, finally now I can live my dream, can play my guitar again after one month of recovery,” he said.

“Now my fingers are completely listening to me, earlier my fingers were erect and changing from one chord to other was difficult,” Prasad added.