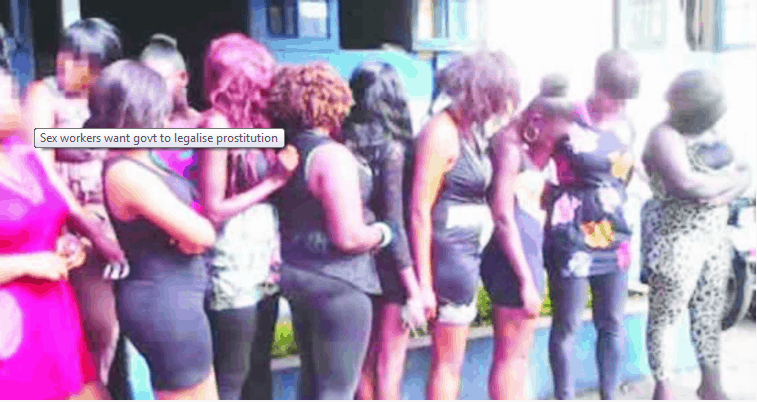 The Nigerian Sex Workers Association has called on the Federal Government to legalise prostitution, to prevent the spread of HIV infection in the country.

According to Punch, the National Coordinator of the association, Amaka Enemo, disclosed this on Wednesday in Abuja during an interview with journalists at the presentation of a report titled, ‘Understanding the High Risk of Urban Sexual Networks in Nigeria.’

The association stated that HIV infection is on the rise because the government treated prostitution as an illegal act and law enforcement agents, especially the police, consequently harassed sex workers and sometimes demand sex without using condoms.

It was learnt that Enemo was said to have played an active role in gathering information for the report, which was compiled by the National Agency for the Control of AIDS, the University of Manitoba, United States, and the World Bank.

She said, “Sex workers face violence, especially from their clients and law enforcement agents. Sex work is seen as a crime and the police raid streets and brothels to arrest sex workers. They collect money and if the girl cannot pay money, she will have to give sex to the policemen. If the law enforcer does not want to use condom, the sex worker has to agree and this is why HIV is on the increase.

She said all sex workers interacted with said their biggest trouble was law enforcers, and several studies had shown that countries where prostitution is not illegal had lower cases of sexually transmitted diseases, while Nigeria, where it is illegal, had one of the highest rates of HIV in the world.

She said sex work should be made legal, and government should not saddle sex workers with the responsibility of paying tax. She added that she had visited many countries where prostitution is legal and decriminalised.

“When you decriminalise it, there will be less exploitation of sex workers and the violence will reduce.”

Emeno said since HIV is a communicable disease and had no cure, sex workers should be given proper treatment and not victimised.

She said an infected sex worker could directly or indirectly infect as many as 100 people, adding that the government must not chase, but partner them.

Emeno added, “Decriminalise the work so that all of us will be healthy. It might interest you to know that Nigeria has the second highest risk of HIV worldwide and we are hoping to get to zero before 2030.

The Director, Strategic Knowledge Management, NACA, Dr Kayode Ogungbemi, also said sex workers must be taken seriously since married men also patronised them. And so, the women must be enlightened on the use of condoms and going for HIV tests to forestall the spread of the virus.

The Country Coordinator, Centre for Global Public Health, University of Manitoba, Dr. Kalada Green, also added that the exercise, which was funded by the World Bank, was done in order to improve the efficiency of HIV prevention methods.