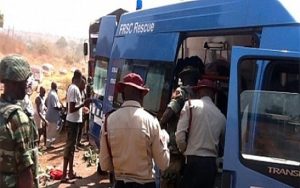 An 18-seater commercial bus collided with a diesel-filled tanker in Ile-Ife on Sunday leaving 14 people dead.

Naija News gathered that the accident happened in front of a fuel station at about 12 noon, few meters away from Mayfair roundabout, as the 18-seater commercial bus heading from Ondo State to Ibadan collided with a diesel-filled tanker that was making a U-turn on the way.

It was gathered that the bus burst into flames, burning most of the passengers beyond recognition including women and children.

Read also: This man was arrested for raping his 13-year-old daughter

It was learnt that the bus was also carrying heavy metal objects which escalated the accident and caused serious injuries to the passengers upon the collision before the bus caught fire.
Only two passengers were said to have been rescued and taken alive to a nearby private hospital.

It was learnt that the driver of the tanker was nowhere to be found, as he left the truck as soon as the accident happened.

According to Witnesses, the delayed arrival of rescue teams to the accident spot aggravated the damage.

The Sector Commander of the Federal Road Safety Corps in Osun State, Anthony Oko, confirmed the incident.
He said, “no fewer than 14 persons were burnt to death”.