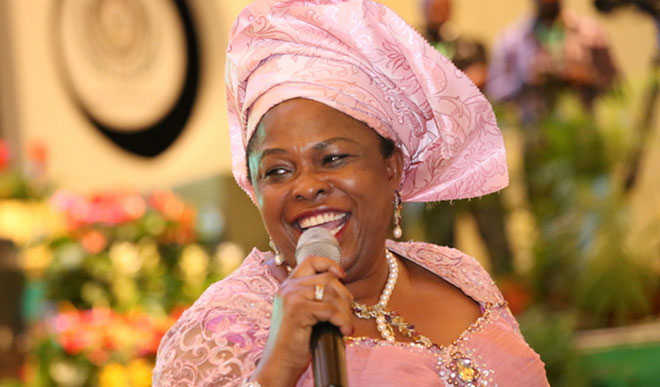 Former First Lady, Patience Jonathan has alleged that the Acting Chairman of the Economic and Financial Crimes Commission, EFCC, Ibrahim Magu once instigated the British High Commission in Nigeria into trying to deny her visa.

Mrs Jonathan claimed that Magu’s letter against her led to subsequent investigation by the British Government which found her innocent and thereafter issued her with a visa.

Mrs Jonathan made the disclosure in a petition written by her lawyers, Granville Abibo, which was addressed to the Speaker of the House of Representatives, Yakubu Dogara.

In the petition, she also alleged that the anti-graft agency incessantly harassed her relatives, including her elder brother, Chief Aseminaso Kalama, for no just reason.

Mrs Esther Oba, Patience’s relative, had also been declared a person of interest by the commission for allegedly operating a bank account with $429,381.87 (N135,255,289.05) for the former President’s wife.

The petition signed by G.I. Abibo (SAN), read in part, “In February 2017, the EFCC through its acting Chairman, Mr Ibrahim Magu, made a spurious report against our client to the United Kingdom authorities and other international bodies – all in a grand design to forestall the renewal of her visa and other travel documents.

“The allegations against our client by the EFCC were duly investigated by the UK authorities and other international bodies who found the reports baseless and thereupon issued the visa and other travel documents to our client.”

The former First Lady said the Nigeria Police Force and the National Drug Law Enforcement Agency had also joined the EFCC in intimidating and harassing her family.

She alleged that the three agencies had searched her properties at least five times.

“On November 3, 2016, the EFCC physically raided and attacked the premises of our client and her relations situated at 2 Igbeti Street, Maitama, Abuja, in the absence of the occupants of the house, carting away valuable items.

“On November 30, 2016, the same premises were raided by the officials of the NDLEA with a lorry load of over 50 operatives under the guise of searching for drugs kept in the house. This raid was carried out in the absence of the occupants of the said house. Our client’s house was broken into and vandalised.

“On January 4, 2017, the EFCC again broke into the said house claiming to be looking for foreign currencies stashed therein. This was done in the absence of the occupants of the house and without any search warrant. The operatives raided the house and took away whatever they fancied,” the petition added.