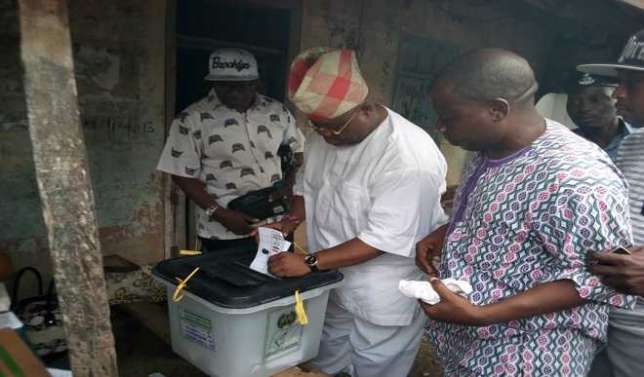 Ademola Adeleke, representing the Peoples Democratic Party (PDP) in the just-concluded Osun West Senatorial District election, has been declared winner after leading in nine out of the 10 local governments in the district.

Ademola who enjoyed the people’s sentiments for his late brother Isiaka Adeleke, defeated his APC opponent, Mudashiru Hussein, polling a total of 97, 280 votes.

The APC’s suffered defeat despite support from the state governor Rauf Aregbesola and the national headquarters of the ruling party.

The result of the election,  announced by the Returning Officer, Olaide Lawal, a professor at the Federal University, Oye Ekiti, showed that the PDP candidate had 31, 165 votes more than his APC challenger.

The election was adjudged peaceful, fair and transparent by both observers and other participants.

Both Messrs. Adeleke and Hussein had commended the conduct of the election, saying it was peaceful and satisfactory.

Mr. Adeleke joined the PDP less than a month before the election, after he faulted the conduct of the primaries of the All Progressives Congress in which he was a contestant.

Below is how APC and PDP fared in the election.